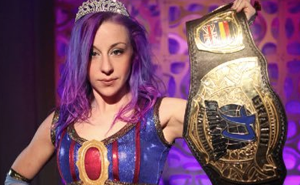 Bio: A former dancer, Laith was trained by Drew Gulak at the Combat Zone Wrestling Academy. She competed in CZW and WSU, frequently wrestling against male opponents, earning respect from fans – and her fellow wrestlers – for her grit and determination. She debuted in SHIMMER in 2013, forming the team Kimber-Bomb with Cherry Bomb (Allie). Kimber-Bomb become one of the most successful tag teams in SHIMMER history, holding the tag titles from April 2015 to June 2016, and simultaneously holding the SHINE tag title for seven months during that time. She became the first female to win the CHIKARA Grand championship in December 2015 with a win over Hallowicked. She signed with WWE in December 2016.

What to Watch For: The German suplex, swinging hurricanrana, satellite headscissors.

Biggest Strength: Toughness. Laith showed her mettle in her intense feud with Chris Dickinson, not to mention many of her other victories over male competitors, including Colt Cabana and JT Dunn. She is a scrapper who won’t back down from a fight. Mike Tyson famously said “Everyone has a plan until they get punched in the mouth.” Laith has been punched in the mouth enough times where it doesn’t faze her anymore. Pound-for-pound, one of the toughest females in the game.

Biggest Weakness: Consistency. Laith is a complex woman. She has been a tough-as-nails babyface and – as part of Kimber-Bomb – a cowardly heel. She likes to keep her opponents guessing about who they’re going to step into the ring with; the girly-girl dancer or the brawling hellcat. It remains to be seen which side of Laith we will see in the Mae Young Classic. If she comes in with a humble, workman-like mindset, she could be a legitimate favorite to win it all. If she comes in thinking she’s got the tourney in the bag and spends more time playing to the crowd, she could be upset early.

Summary: Laith isn’t the flashiest in the field, but it’s a mistake to overlook her. However, regardless of how she fares in the tournament, she is likely to be a major factor in in NXT in the coming year. 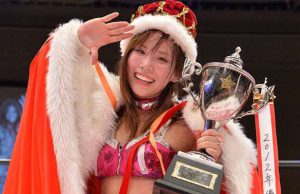 Kairi Sane
5’1”, 115, Hikari, 5
2016 PWI Female 50 Ranking: NL
Previous wrestling identity: Kairi Hojo
Bio: A former collegiate yachter, Hojo worked as an actress before being recruited by Japan’s all-female STARDOM promotion. She began training in 2011 and made her pro debut the following year, adopting the nickname “Princess Pirate” in reference to her sailing background.
Kairi quickly became one of STARDOM’s top stars and most decorated competitors, winning the World of STARDOM title, the Wonder of STARDOM title, the Goddess of STARDOM tag title (three times), and the Artist of STARDOM six-man title (four times). She also appeared in Lucha Underground last year as part of the Black Lotus Triad.
Along with Io Shirai and Mayu Iwatani, Kairi was a cornerstone of STARDOM. Her decision to jump to WWE sent shockwaves across the Japanese joshi scene.

Style: Kairi is an innovator with an impressive mat-based approach, coupled with aerial attacks. An aggressive competitor who tends to control the pace of the match, Kairi attacks with dropkicks and suplexes before finishing opponents with her signature elbow rop.

What to Watch For: The gorgeous flying elbow drop off the top rope. No one executes the move with as much grace and panache as Kairi. Even Randy Savage would be green with envy.

Biggest Strength: Deep offensive repertoire. Despite having only five years of experience, Kairi was wrestling a heavy workload for STARDOM, often competing five days a week against world-class opponents. She has faced a diverse assortment of wrestlers, including Io Shirai, who is widely considered to be the top female wrestler in Japan today. She has seen just about everything and knows counters to moves many of her opponents in the Mae Young Classic have probably never seen. She is adaptable and has the poise and knowledge of a veteran.

Biggest Weakness: Size. Kairi is a firecracker, but she’s barely five feet tall and just 115 pounds. She is one of the smaller women in the tournament and runs the risk of being overpowered and grounded.

Summary: Anyone who has seen her work in STARDOM knows that Kairi is one of the top female wrestlers in the world. But with Asuka established in NXT and Io Shirai reportedly on her way, Kairi may find herself pushed out of the spotlight. That’s why it’s so important for her to make waves in this tournament. Her long-term future in WWE may be riding on it.