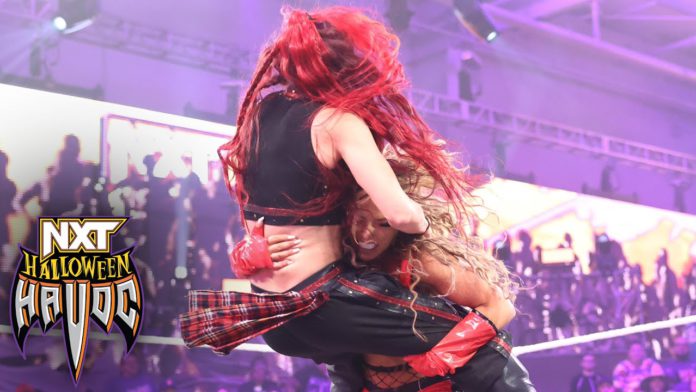 Mandy Rose is still the NXT Women’s Champion after defeating Alba Fyre at Halloween Havoc. She headed into last year’s event of the same name without a championship to her name in her WWE career. She would go on to defeat Raquel Gonzalez to win her first gold and this year she went in still as champion.

Prior to the match, there was a cinematic moment as all three members of Toxic Attraction met Fyre at a haunted trail/house. In a fun and campy segment, Fyre would take out Gigi Dolin and Jacy Jayne before capturing Rose to take her back to the Performance Center. Jayne was arguably the MVP of the segment.

The match would take place in the spot prior to the main event (the drive must have been long for Fyre with Rose in the backseat). The final moments of the match had Dolin and Jayne emerge and pull the referee out of the ring just as Fyre was about to put Rose away. With the referee now down on the outside, Fyre would fight off Dolin and Jayne before delivering a Gory Bomb. She went for the pin but there was no referee to count!

Fyre would go outside to get the official back in the ring but after she rolled him in, Toxic Attraction would continue the assault. Back in the ring, Rose was ready to take advantage and would hit Kiss by the Rose, tucks Fyre’s arms beneath so she couldn’t grab the ropes, and got the three count. After the bell rings, Rose blows a kiss and looks up as a dedication to her brother who recently passed away.

Rose sits at 361-days as champion. In just four days she will be at one full calendar year.

The other women’s match at the event was a Weapons Wild Match where the rivalry between Cora Jade and Roxanne Perez continued. This match pulled out a lot and even had Perez spending some time in a trash can.

After a multitude of weapons were used, the two found themselves up top on the pre-show stage. Jade would unhook the railing to throw Perez off of the stage to the table below. But instead, Perez would take Jade with her as they both came crashing down. Back in the ring, Perez would get the better of Jade finally and get the pin for the victory.