Maria: The Bad Boys Are Always Catching My Eye 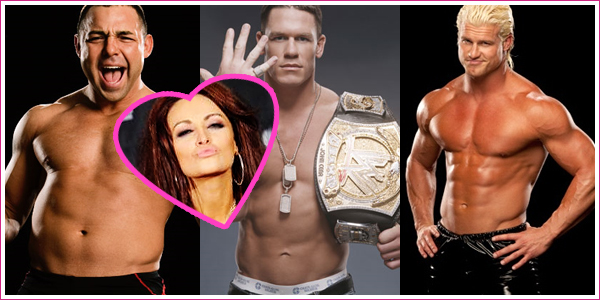 Is it just me or is Maria the most gullible WWE Diva in history? No, I’m not knocking her… I mean the way she’s scripted. Maria the character hasn’t had much luck in the man stakes, has she? Current beau, Dolph Ziggler is your typical bad boy, the one that all your friends warn you away from and you don’t listen. Oh Maria, if only you had learned from the countless teen soaps…

Let’s look at her man history: Thankfully, unlike countless Divas before her, Maria hasn’t been entangled with Vince McMahon… yet. However her first ‘love affair’, if you could call it that was with one John Cena. Not much happened there, it was kind of a ‘dine and dash’ situation; he kissed her one week and then acted like she didn’t exist the next. Let us reminisce on that ~magical kiss~

Let’s surmise; former boyfriend Santino, somewhere between dating and Maria and Beth Phoenix, decided to become a cross dresser. Current boyfriend, Ziggler, was a male cheerleader. Boy, does she know how to pick ’em or what?

Overzealous boyfriend, Santino, who we shall call ‘Raw boyfriend’ wasn’t happy when Maria decided to pose for Playboy. This resulted in the once lovable, ditzy Maria becoming a whiny, argumentative and petulant in her bid for ~independence~ Sadly, I don’t think posing for Playboy is what the Suffragettes were thinking of, homegirl. After breaking up with Santino and having her clock cleaned by the future Mrs Santino and Melina at WrestleMania 24, in true Jerry Springer style, Maria and Santino fought… literally:

And now that brings us to current boyfriend, Dolphus Ziggalarus aka ‘SmackDown boyfriend’. Let’s be honest, Ziggy is one fine piece of ass minus the bleach blonde hair, but the plot with him, Maria & Melina is the kind of white people drama we expect from 90210, not a wrestling show. Among the romantic Ziggy-Maria dates includes a quickie in the closet:

Ah the makings of true love! Then disaster strikes… Melina, of all people, decides to stick her oar in. I don’t know what’s worse, Melina and Maria acting like they’re friends or Melina having to act like she gives a sh*t about Maria’s love life.

So the plot thickens… This week on SmackDown, the ~love story~ meets another Gossip Girl style turn.

It seems like Maria has been involved in more of these stupid love storylines than any other Diva and every time, gets her poor, ickle heart broken. Torrie Wilson was the go-to girl for T&A in WWE, has Maria become the go-to girl for romantic tragedies? And how soon before the Titanic that is Ziggy & Maria hits the iceberg?

Discuss: So this week on SmackDown, Melina tells Maria she saw Dolph with another girl. I wonder if they might make said ‘other girl’ into a character? No doubt, a character that conveniently knows how to wrestle… Which FCW Diva would you cast in the role of Maria’s antagonist?