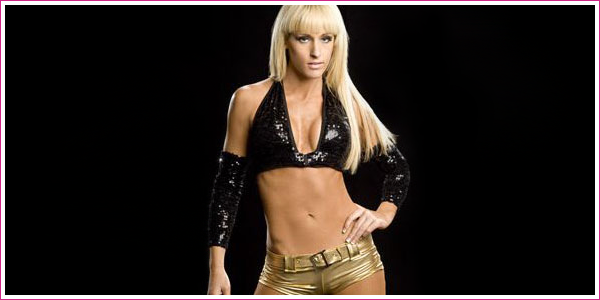 Say what you will about the Women’s Champion, Michelle McCool, but there is no denying that she has a good head on her shoulders. Despite being chalked up as a hate figure by Internet wrestling fans and even some ‘newz’ sites, McCool is quick to address and laugh off insults and criticism thrown her way. That’s my kinda gal!

In an interview with our friends at MichelleMcCool.net, the history-making Diva talks about all sorts of topics including picking her Night of Champions match with Melina as her favourite match so far. And we are inclined to agree:

Melina has been great to work with and our NOC match is by far my all time favorite. I am very proud of that match and what we were able to do….work wise, psychology wise, everything! :) It was great to put our minds together and go, “What could we do that hasn’t been done before?” It was actually nice because even a few of the guys said, “Man, I wish I would have thought of that!” :) We don’t always get opportunities, so we wanted to take full advantage of it.

The Women’s Champ continues about what she’d like to see in the women’s division, validating what fans would like to see too:

Things have definitely changed, and continue to, as far as the role of divas in wrestling. It’s just refreshing when you receive a lot of praise and appreciation for an actual wresting match. I would give anything to have a no DQ match, a street fight, something. I can promise you this….it’d be one you wouldn’t forget! Blood sweat and tears…it’d all be left in the arena!!!

Things turn a little darker, as McCool turns her attention to the whirlpool of criticism, not least extending to claims that she stole AJ Styles’ [though he isn’t named] finisher, the Styles Clash — known as the ‘Faith Breaker’ in WWE:

Yeah, that seems to be the hot topic with some Twitter “fans!” 99% of the time I move on. Sometimes, and normally only when people are out of line with their message, I answer to entertain myself. Regardless, the answer is always the same. From headlocks to rollups, it’s all been done before – yadayadayada. Plus, it works! Why would I not want to do it?

It’s not as though Ms McCool isn’t aware of her ‘status’, shall we say, on the Internet and I find it even more heartening that she’s able to brush it off. Never has there been a Diva quite as Boleyn-esque in fans’ attempts to plot her downfall. Most recently ‘reports’ of the situation Michelle touches on above, with the implication that she has heat in a company that she doesn’t even work for. Considering the source’s history [Victoria-Benoit], it’s not something that we were in a rush to report. I’m glad to see the Champ has a tougher skin than most & rolls with the punches — even throwing some of her own. She’s certainly gonna need that thick hide with people jumping at the opportunity to proverbiabally behead her, a la Anne Boleyn.

Read the full interview by clicking here. Michelle discusses lots of other interesting & insightful topics including Torrie Wilson, how the WWE.com photoshoots work and more.