Melina on Alicia Fox: “She Can Wrestle” 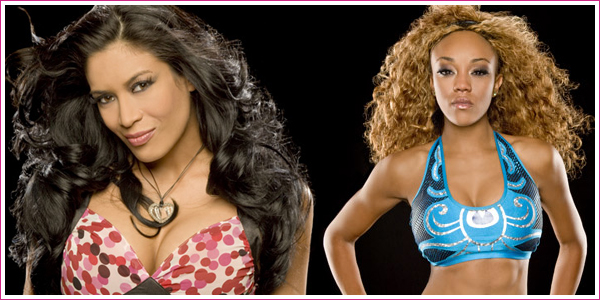 Looks like we aren’t the only ones fawning over Alicia Fox, as former Women’s Champion Melina sang the rookie’s praises in a radio interview earlier this week. Fresh from her Women’s Championship loss at The Bash, the Melina press tour continued as she was interviewed on B95 showing a lot more personality and humour than on her televised interview that we posted yesterday.

Melina is asked about the FCW developmental territory and how it compares to where Melina was bred, OVW. Melina notes that Alicia was trained in FCW, saying: “… Alicia Fox, she came out of there and I’m really impressed by her because she can wrestle.” She continues, “To see the future of wrestling coming up and they’re able to handle their own, to me that says a lot.” Listen to the full interview below:

Other topics Melina touches upon is the fact that her tears were genuine when she was drafted to Raw. She says she was in tears because she would miss her close friends that she travelled with for so long and refers to those rumours about their being heat on her.

I really like this interview, unlike the more constrained and conventional television interview, this one was a lot more free and fun. Melina showed a lot of personality and was asked fun questions, being able to bounce off the interviewer.