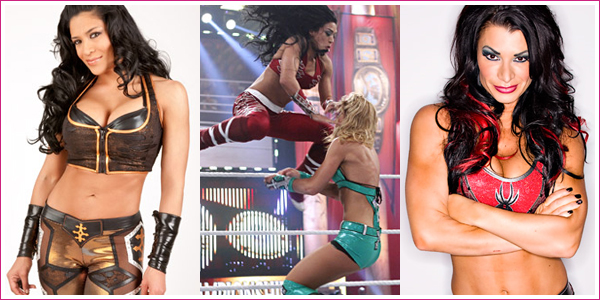 The Diva Dirt readers have spoken! In our 2009 Year-End Awards, Divas Champion Melina and new Knockouts Champion Tara took top honours as Diva and Knockout of the Year, respectively.

Melina had more reason to celebrate as she along with Maryse received the most awards. Melina picked up four singles wins including the aforementioned top prize as well as an additional two awards with Michelle McCool. Maryse on the other hand received the most awards last year and managed to exact the amount this year, winning four awards.

The Match of the Year as voted for by you was July’s Women’s Championship match between Melina and Michelle McCool. The category had the most nominations, with 10 matches to choose from. This is the second year Melina has been involved in the Match of the Year award-winning bout, as her ‘I Quit’ match with Beth Phoenix won the award last year.

With the boom of Twitter across the world in 2009, we created the ‘Best Tweeter’ award which was voted solely through Twitter. The award was picked up by TNA Knockout, Awesome Kong.

This year, 5000 votes were counted in the Year-End Awards.

To find out all of the winners, click here.

We’ll be revealing the runner-ups in the various categories on Monday’s episode of D3.