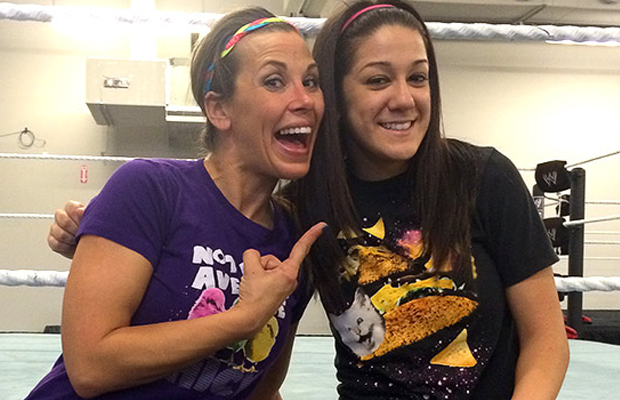 Capping off a week spent training NXT Divas at the WWE Performance Center, former Diva Mickie James sat down for an interview with WWE.com, discussing her experience with the up-and-coming Divas and rumors of a WWE return.

How did the training gig come about?: “I got a call from Talent Relations, and they asked if I would be interested in coming down, checking it out and working with some of the girls here. Of course, I jumped all over it; I was happy to do it. The place is amazing, it really is mind-blowing. We had all prayed for something like this [when we were] breaking in.”

Which NXT Divas have stood out to her?: “Obviously, I see so much with Paige; she’s awesome, I think she’s really great. And there are a few of the younger girls. Lexi (Alexa Bliss) has tons of personality and tons of potential. Mercedes (Sasha Banks) and Emma are really good. Shaul Guerrero, too; I don’t know if it’s just because it’s in her blood, but she’s a natural. Her footwork, her movements, and her personality are through the roof. Each of them has their strengths and you can see their personalities coming out more and more. That’s what I’ve really been trying to focus on with them too.”

What has she been teaching them?: “Mostly being vocal in the ring and being vocal while they’re working instead of just thinking about what their moves are and what they need to do in there. Actually being who they are.”

On rumors of a WWE return: “Of course, I would absolutely love that, but you never know. I’m just trying to take advantage of this opportunity. If I can pass a little knowledge of what I know, then hopefully that will do something, if not for me, then for the future of WWE and women’s wrestling itself.”

Check out the full interview on WWE.com.

Do you think Mickie will return to the WWE?