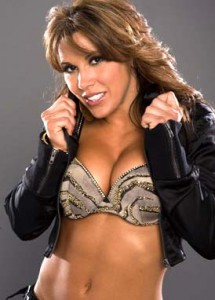 The Number 1 Contender to Tara’s Knockouts Title talked about her music career, her current tenure with TNA, her very first botched chair shot and also the moment she knew she had made it in professional wrestling.

The Hardcore Country singer spoke of her match at WrestleMania 22 with Trish Stratus and she stated that it’s a moment she will never forget.

She said: “I can remember it like it was yesterday. After I jumped off the turnbuckle and dropped Trish’s knee over the top rope and then I jumped down… and looked around, and saw 80,000 people screaming back at me. I almost had tears in my eyes. I was like, this is it.”

The five-time Women’s Champion, one-time Divas Champion and two-time Knockouts Champion also spoke about her relationship with Lita, her upcoming album and the first ever chair shot she delivered, which happened to be to the host of the show!

Check out the interview below.