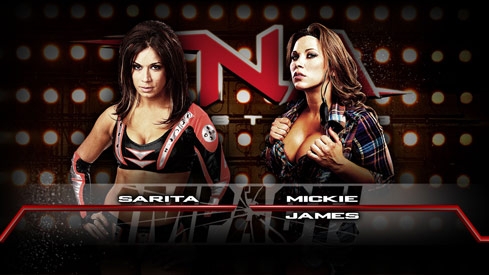 TNA is advertising Mickie James making her in-ring debut for the company this Thursday night on Impact. The match will mark the first time fans can see her wrestle on national television since April, when she teamed with Beth Phoenix against Lay-Cool on SmackDown.

James will face off against Sarita, who makes her long-awaited return to Impact.

The pair taped two matches last week for TNA television. On Monday, they taped a match for Xplosion that ended up being Mickie’s first match back in TNA, then Tuesday taped this match, which will thankfully air first as it was silly to put her debut on a show that only airs outside of the US.

James will debut a brand new style of ring attire (preview in the graphic above), which caused some debate in our comments over the weekend. Check out pictures of her new look here. (Be aware of spoilers!)