Mickie’s Got Something to Hide 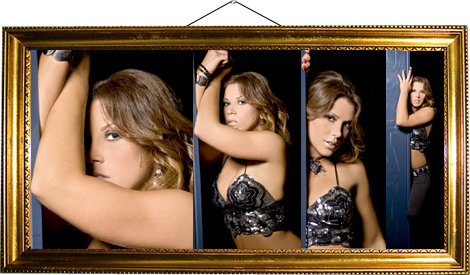 Diva Dirt’s dishing up your regular serving of Eye Candy! View the photoshoot we’ve “hung” on our wall, read our critique, vote, and last but not least – sound off in the comments.

The Look: Mickie’s hiding behind what looks like a locker, so we don’t really get a good look at what she’s wearing, but it’s clearly the outfit she wore a few weeks ago on Raw, so I’ll judge it from that. with a better look, we can see that Mickie’s wearing a skimpy little top (reminiscent of the Little Mermaid’s shell bikini?) that looks mighty shiny and tiny. It doesn’t look bad on her at allâ€”it fits her body well and the color’s niceâ€”but I can’t think of any situation outside of a wrestling show or photoshoot that that top wouldn’t look like part of a stripper’s ensemble. I guess you could say that about a lot of what the Divas wear.. Hm… Anywho, as for the rest of the look, Mickie keeps it simple, wearing black trousers and heels. She balances out the skimpiness of the top by wearing full-length pants, and with that escapes looking completely trashy. Her necklace and bracelets go with the top perfectly, the dark metals accenting it well. That, along with the cool tones in the makeup, creates a look that is both sexy and a bit rock-n-roll, a bit of a departure from bright-and-sunny Mickie that we’ve come to know. Grade: B+

The Poses: Pretty much the whole shoot involves her posing behind something, so there’s only so much to do. It’s cool and different, though, and adds a bit of mystique. She looks both sexy and alluring, and almost a little scary. Maybe I have a thus-unknown fear of the dark, but it looks a little spooky behind her, all dark and shadowy. Hell, it makes the shoot that much more interesting, I guess. Grade: A

Uniqueness: The posing is certainly different, compared to all the in-your-face posing the Divas often do. Partially obscuring a Diva behind an object isn’t something they often do, and gives the photoshoot a more artistic vibe. That, and the look Mickie’s sporting is something we don’t usually see her inâ€”such dark tonesâ€”so the shoot is bit out of the ordinary in several senses. Grade: A

Overall: The top is just about the only thing I’m not fond of, but everything else in the shoot works so well that I’m able to look past it. It’s definitely not your usual Mickie James shoot, but I like it. Maybe she should get serious more often. Grade: A