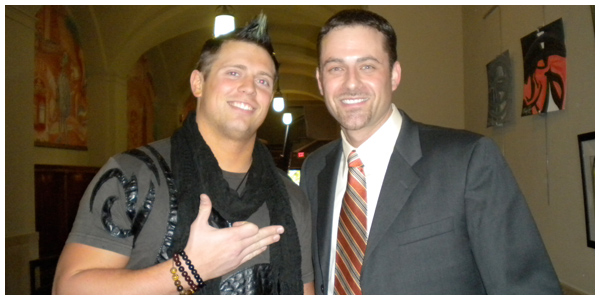 Diva Dirt’s Mr Glamazon brings us her exclusive daily blog detailing her adventures in Atlanta for WrestleMania 27 this weekend. Check back each day for a new entry!

I’ve said it before and I’ll say it again – the WWE Art Show is the best event of the year for wrestling fans.  You may not believe me but here’s the deal.  It is the first event of the week so a lot of fans aren’t in town yet.  It is nice and intimate.  The food is great.  The drinks are flowing.  The art is interesting (and for sale).  The WWE stars are relaxed and just hanging around.  If you want to meet one of your favorite stars, trust me, the Art Show is the way to go.  The Axxess sessions are a lot of fun too, but there are a ton of people there, the lines are long, and you only get a brief moment with the star.  Tonight will be my third Art Show and if it’s anything like the first two, I’m going to have a blast.

Two years ago it was all about Beth.

When I flew down to Houston for WrestleMania 25 I was definitely excited for the Axxess sessions, the Hall of Fame, and WrestleMania itself – especially the Undertaker vs. Shawn Michaels match which I thought had a chance to be really special (I was even excited for the 25 Diva Battle Royal which sounds silly now).  I was also looking forward to spending time with my good friend Jamie.

But truthfully that was all secondary.  Basically I just wanted to say hello to Beth, get a photo with her, and then get a signature.  That’s it.  Operation Glamazon.

The WWE Art Show was held at a nice library downtown.  I was there by myself because Jamie’s flight was delayed from Baltimore.  That’s OK, he would join me soon enough.  I lined the red carpet and waited for the WWE stars to arrive.  The limos started pulling up to the front door and right away Beth Phoenix stepped out arm in arm with Santino.  Good lord almighty – Glamarella had arrived and WrestleMania week was off and running.

Inside the library I started to mingle with the other WWE stars, Vickie Guerrero, Matt Hardy, Natalya, the Bellas, The Miz.  I made small talk with other guests.  I saw Beth from across the room but I was too nervous to say hello.  Finally (after a glass of wine) I walked over to her.  She was so warm and friendly that she put me right at ease.  We chatted for a few minutes.  I don’t think I said anything too crazy but who the hell knows, I basically blacked out 30 seconds after meeting her.  I did wake up long enough to get a nice photo (I made sure I showed my good side) and an autograph.  Dreamy.

In the end the entire night turned out perfectly.  Beth was great, the show was a lot of fun, and I even bought her oil painting (which she then signed on the back).  Our photo together even appeared in the February 2010 issue of WWE magazine.  Kind of cool!  The Art Show was the start of a great week in Houston.

Last year it was all about Beth signing the magazine photo.

I knew I would see Beth at the Art Show so I was pretty confident Operation Glamazon Part II would be successful.  In Phoenix the Art Show was held at a nice resort outside the city.  The scenery was amazing and everyone enjoyed the red carpet arrivals, especially when Bret “Hitman” Hart got out of a limo and made a surprise appearance.  Beth and Bret at the same event?  A “once in a lifetime” for me.

Once again Beth was gracious and friendly and it was nice catching up with her.  I got my signature and we laughed about the picture being published.  I noticed though that since I was now working for Diva Dirt I was just as excited to meet some of the other girls I hadn’t met before: Layla, Alicia Fox, Tiffany, and Rosa Mendes.  The Bellas were there again, as was Natalya, so that was cool.  Each one as nice as could be.  Some even complimented the work we do at Diva Dirt and were grateful for the support.  I left that night with Layla’s hand-painted piggy bank and a host of new memories.  Similar to the previous year it was a “flawless” way to kick off WrestleMania week.

I can’t believe I’m finally meeting Cryssi in person.  We’ve been coworkers for almost a year and a half and recorded hours of audio together yet we’ve never really met.  Surreal.  That will be a nice moment.  I really hope to meet the other Diva Dirt staffers at some point.  It’s a great group.

Jamie and I also talked about the wrestlers who won’t be in Atlanta this year, the ones we met before who have since left the WWE.  There’s a lot of them.  Katie Lea, Mr. Anderson, Mickie James, Jeff and Matt Hardy, Jillian, and Tiffany, to name a few.  Some left on their own.  Some were given their release.  Whatever the reason it’s a reality check that these jobs don’t last forever.  No wonder each star on the roster treasures their WrestleMania moment.

We mentioned again how disappointed we were about Lisa and Karen not coming to WrestleMania this year – we met them in Houston and have remained in touch ever since.  But that’s the great thing about the special bond between wrestling fans.  Maybe we’ll see them in Miami next year.  Maybe not until WrestleMania 30, or 31, or 32.  But there will be a next time.  And we know that when we do we’ll pick right back up where we left off.  The great thing about friendship is there is no expiration date.  I look forward to making new friends this week as well.