My Diva Senses Are Tingling! 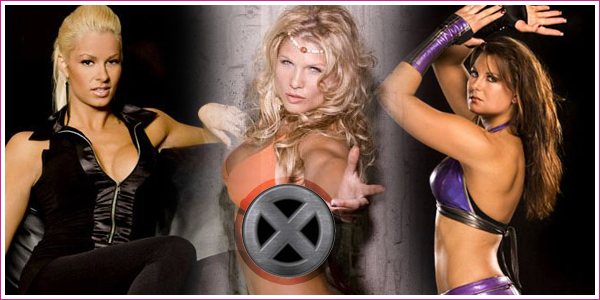 Perhaps spawned from my recent obsession with X-Men, I thought to myself, the Divas have a lot of charm and charisma (generally), they’d make great heroes and villains. So, I’ve compiled a list of Divas, mutant-ised them and given them a back story. If anyone is a fair drawer, feel free to turn them into a comic book. ;)

Melina a.k.a The Sonic Blaster

Power: By clapping her hands together, Melina can create a sound wave that rumbles the earth. Her most devastating sound wave is produced when she screams.
Alliance: The Goodies.
Her Story: Melina grew up in a rich family, living a very comfortable life. She was born with her powers, setting off tremors when she threw tantrums as a child. Her parents took her to every globally recognised doctor, but none of them were able to diagnose and change Melina. Her parents loved her nonetheless, they home-schooled her until they sent her to a private school when she was old enough to stop herself from cause a sound wave. It was there she met Beth Phoenix, and became best friends after bonding over their powers. When she was 16, her parents were brutally murdered, whilst she was away on a camp. With her large inheritance she bought a mansion just outside Diva City and established The Guard, a group of heroes who strove to keep the city and it’s people protected.

Kelly Kelly a.k.a The Angel Avenger

Power: Kelly has wings that have grown from her shoulder blades. She also has the power to manipulate any person’s mood and thoughts.
Alliance: The Goodies!
Her Story: Kelly’s wings began to grow when she was only 14. They grew to a span of 13 foot in just over eight months. Because of her obvious difference to the rest of society, her parents pulled her out of her high school and sent her to be home-schooled by her estranged auntie that lived in a town with a very small population. From her young age, she thought of her wings as a curse, stopping her from being a normal girl. Over the years, Kelly came to realise that her family feared her and ran away from her home to find a place where she could fit in. After months of sleeping in forests and deserted houses, trying to find a new home, she met Melina who immediately took Kelly up as her apprentice, and providing a home for the unfortunate 18 year old girl. Under the training of Melina, Kelly discovered her powers of manipulation, and learnt to control them. She still sometimes views her power as a curse. Four years later, at only 22, Kelly fights for the good guys, to show everyone, especially her parents, that they shouldn’t fear her just because she’s defferent from them.

Maryse a.k.a The French Kitty

Power: Maryse has heightened senses and abilities, allowing her to more agile and accurate than even a regular person who has trained in agility and accuracy all their life.
Alliance: Neutral.
Her Story: Not a lot is known about Maryse. It is unknown if she was born with her powers of if she developed them later. She was a perfect student and a force to be reckoned with in every sport she dabbled in, but didn’t like to participate in competitive sport because she didn’t find it challenging. She began to realise her gift when she was playing darts in a bar when she was 21. Although she had never played, she always got the bulls eye. Maryse carries two daggers, which she uses in combat. She does odd jobs for anyone, as long as she gets paid. Even though, she is not associated with a league of villains, she has caused many head-aches for The Guard.

Beth Phoenix a.k.a The Brawler

Power: Beth has enhanced strength which makes her stronger than anyone regular person.
Alliance: The Baddies!
Her Story: Beth was a mild-mannered girl when she was growing up, much different to the aggresive woman we see today.Â  Her parents noticed that she was quite strong for her age, but thought nothing of it, saying that she was just developing faster. Beth wasn’t as quick to overlook the issue, as she got older she became more and more aware of her strength. She went to a private school, and became best friends with Melina, who disappeared when Beth was 15. When she graduated her power had manifested to it’s peak, and her strength was much more obvious and harder to hide. Society labelled her a freak and she became an outcast. When she was 20, Melina got back into contact with her, asking Beth to join her to help protect humans. Beth refused, angered by the suggestion to help protect the humans that had made her feel defective. She started a league of her own, dedicated to taking over the world and controlling the regular humans lives so they would see her as a god and worship her.

Katie Lea a.k.a The Mystic Mage

Power: Katie Lea has the power to manipulate the elements, but she cannot produce the element at will, she can only manipulate them.
Alliance: The Baddies.
Her Story: Katie Lea doesn’t seem to hold an interest in taking over the world but she does that believe that mutants are above men. It is speculated that Katie Lea likes being in Beth’s league because she enjoys pointing out the holes in Beth’s plans. Her personality is quite cynical and sarcastic, which drives Beth crazy. Despite their problems, Katie LeaÂ  and Beth have managed to forge a strong friendship, which consists of Katie Lea and Beth exchanging snide remarks to one another, seeing who can make the other snap. Katie is thought to have a strong dislike towards Kelly Kelly because she believes someone who considers her power a curse does not deserve to be a mutant.

I hope you enjoyed my second post! I had a few more but then I realised how long this was. :) Do you think the character is true to the diva? Do you have a favourite character?