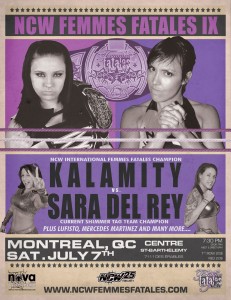 The show will feature Kalamity defending her Femmes Fatales Championship against Sara Del Rey, LuFisto vs. Mercedes Martinez, and a plethora of debuting talent (including the Midwest Militia, KC Spinelli and Leah Von Dutch).

Results from the show are coming to you thanks to Twitter.

* Angie Skye (w/Kath Von Goth) def. Leah Von Dutch following interference by Von Goth.
* Missy def. Deziree.
* Two videos aired – one promoting the next show on November 3, and another with Mademoiselle Rachelle berating Mary Lee Rose and telling her that this was her last chance to prove herself.
* Veda Scott def. Mary Lee Rose after interference from Rachelle. Rachelle tripped up Rose, which led to her defeat. The Midwest Militia made their way out… only to declare that Mademoiselle Rachelle had now aligned herself with their group! Courtney Rush made the save for Rose and offered her a spot in her team’s corner later on in the evening.
* “The Canadian NINJAS” Portia Perez and Nicole Matthews def. Cherry Bomb and Sweet Cherrie to earn themselves a shot at the SHIMMER Tag Team Championships in November at Femmes Fatales X. Cherry Bomb turned on Sweet Cherrie after the match.
* LuFisto vs. Mercedes Martinez went to a double count-out. The two brawled all over the building. A highlight included LuFisto with a big moonsault from the top rope on Mercedes (who was outside of the ring).
* Hailey Hatred, Athena and Saraya Knight were announced for the November 3 show.
* LuFisto and Mercedes Martinez will face off one more time on November – this time, in a Cage Match!!
* “The Pink Flash” Kira def. She Nay Nay. Kira was attacked by The Canadian NINJAS post-match, who hit her with a chair. They then proceeded to demand their tag team title shot right now – they were choosing not to wait until November for their match. Courtney Rush was eager to defend the titles, but Sara Del Rey was not having a bar of it and even offered to forfeit her title. However, referee Bryce Remsburg gave it back to her and the match was on.
* SHIMMER Tag Team Championship Match: “The Canadian NINJAS” Portia Perez and Nicole Matthews def. Sara Del Rey and Courtney Rush (c) to become the new champions! Del Rey abandoned Rush during the match.
* Cheerleader Melissa def. KC Spinelli.
* The Midwest Militia of Jessicka Havok, Allysin Kay and Sassy Stephie def. Courtney Rush, Xandra Bale and a returning Cat Power in six woman tag action. Havok pinned Xandra Bale after a spiral powerbomb.
* nCw Femmes Fatales Championship Match: Kalamity (c) def. Sara Del Rey.