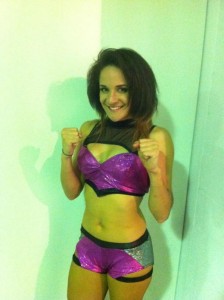 In the tournament to crown a new Interim PWWA Champion in Madison Eagles’ absence, two more competitors have advanced after having their first round matches May 5 at the Casula Powerhouse.

Shazza McKenzie received a bye into the next round – her original opponent, Eliza Sway, unfortunately had to withdraw from the tournament due to medical reasons. As a result, Jessie McKay challenged Shazza to a non-tournament match-up and the two girls went to a fifteen minute time limit draw.

This means that Kellie Skater, McKay, Shazza and Evie have all advanced to the next round of the tournament (to be held June 15th at the Camden Civic Centre).

In other PWWA-related news, Nikita Naridian (also known as Kellyanne English in her debut PWA/PWWA appearances) and K.C. Cassidy will be making their Canadian debuts this weekend, when they face off against each other for PWA Canada.

The show will be held at the Century Casino Showroom.

The two have recently begun training at Lance Storm’s Storm Wrestling Academy, and are the only two girls in his May 2012 class.

Melissa Coates is the next name added to the Big Time Pro Wrestling “Ladymania” show on May 26th.

To take place at the Rideau Carleton Raceway, the all-women wrestling event is a first for Ottawa.

The card features some of the top women’s wrestlers in Canada, with such names as Portia Perez, She Nay Nay, Leah Von Dutch, Jewells Malone, Addy Starr, Kaitlin Diemond and Persephone Vice already announced for the show.

Jennifer Blake and Courtney Rush vs. Cherry Bomb and Leah Von Dutch has been added to NEO Wrestling’s “Art of War: Hart of Darkness” show on June 9th.

General Manager Bret Hart has reinstated Courtney Rush for one night only and has stated that if Courtney Rush’s team wins the match, then Rush will once more be a permanent addition to the roster!

The “Portuguese Princess” Ariel is pregnant with twin girls. Congratulations to Ariel!

Check out a cute photo of her and Nikki Roxx, that the latter Tweeted.

For those whom were left disappointed by the fact Meiko Satomura was unable to attend JoshiMania back in December (and thereby, unable to wrestle her dream match with Sara Del Rey), need only stay that way one week longer – the match has been rescheduled for CHIKARA’s “Aniversario: The Ogg and I” event on May 20th!

Also on that show will be Saturyne vs. Kagetsu in a singles match and Sendai Sachiko teaming up with Dash Chisako to take on The Bravado Brothers in inter-gender action.

In addition to the Sendai Girls tag match already announced for the night before (at “Aniversario: A Horse of Another Colour”), Del Rey and Saturyne will also be in action. Saturyne will team up with Eddie Kingston, Scott Parker and Soldier Ant to do battle with Del Rey, Jigsaw, Shane Matthews and Green Ant.

However, the two will team up themselves only a few weeks later on June 2nd at CHIKARA’s iPPV show, “Chikarasaurus Rex: How to Hatch a Dinosaur”, when they verse The Batiri in a three-on-two handicap match. The event will be streamed live at www.gfl.tv.

Veda Scott has all the information you need know about the iPPV in this video: