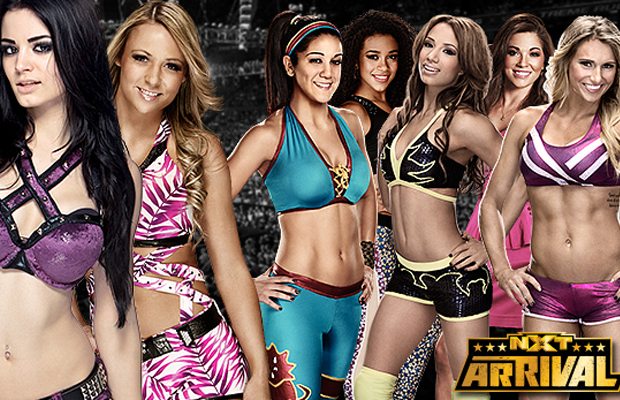 In one week, NXT Women’s Champion Paige will put her title on the line against the newest WWE Diva, Emma, at NXT ArRIVAL.

WWE.com has spoken to five NXT Divas to get their predictions for the match: Bayley, Charlotte, Devin Taylor, JoJo and Sasha Banks.

Devin predicted the match would end in Paige’s favor:

“I think Paige will remain the NXT Women’s Champion. Although she has been out for a while with an injury, I don’t think this will be a disadvantage to her. Sometimes when you’re on the sidelines, it makes you hungrier, and you come back stronger physically and mentally. Paige has had the opportunity to see Emma’s success on Raw and SmackDown, and the last thing she would want is for Emma to continue that success on NXT.”

“I can’t wait to see part two of this match. Paige beat Emma to become the first NXT Women’s Champion, and now we get to see if Paige can do it again. The first match was great and historic, but at NXT ArRRIVAL, it will mean even more. This is their time to prove to not just the NXT Universe, but to the whole world, who is the best once and for all. It’s hard to choose who I want to come out on top because I’m good friends with both. But if I have to choose, I would have to go with Emma. The #EMMAlution has been running strong as of late, and I’m not sure that Paige can stop it.”

Both Charlotte and Sasha Banks seem more worried about when they’ll get their shot at the belt. Charlotte said:

“I want Paige to hold onto the Women’s NXT Championship so the BFFs can be the ones to end her winning streak!”

“As far as we are concerned, Emma is a joke and a comedy act. If by some miracle she’s able to win, we are going to slap that smirk right off her face and take the NXT Women’s Championship.”

“I think the match between Emma and Paige is going to be very close. Both Divas are tough competitors, and both bring something different to the table that we really haven’t seen in a long time. I know Paige won’t give up her title up, but I also think Emma is going to surprise a lot of people with how well prepared she is for this match. It’s a win-win situation for all of the NXT Divas.”

You can read the full article on WWE.com.

Whose prediction is most accurate?