NXT Redux (February 19th, 2014): The Emmalution Marches on Towards ArRIVAL 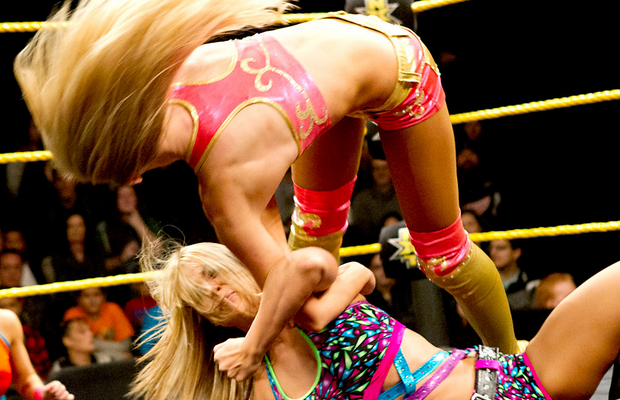 What’s up Diva fans and welcome to this week’s NXT Redux. With just one week to go until NXT’s live episode on the WWE Network, Emma is looking to go into next week in the best possible fashion, and no, I’m not talking about her hand-made t-shirt. I am, of course, talking about getting a win! In her way is main roster rival and fellow dancing Diva, Summer Rae. Will Emma dance on happily towards next week or will Summer burst her bubble?

The first Diva sighting of the night is that of Eden, who is going by the name Eden on NXT, yet is being referred to as Brandi Rhodes on WWE.com. Continuity and WWE have never quite went hand-in-hand, have they?! The first Diva to enter the Full Sail arena is Summer Rae, who is looking gorgeous in gold… and pink. Of course, Sasha Banks and Charlotte are also at ringside, and I’m happy to report that Charlotte has not only ditched her weird obsession with wearing generic t-shirts but she has also perfected her mean girl strut! Has hell frozen over?! It’s a shame that Charlotte didn’t get the memo about the yellow/gold and pink outfits…

Out next is the bubbly #1 contender to the NXT Women’s Championship, Emma! She bounces her way onto the stage and before she can dance down that ramp, she beckons Bayley to the stage with her, and she’s brought various handmade signs with her. One said something about Summer having green and yellow teeth? It was all in random statements and Summer was spelled wrong. Really bizarre and I didn’t get it. Bayley and Emma are meant to be eclectic, not bad spellers! I’m totally a member of the grammar and spelling police so before this annoys me even more, let’s get into the match!

The bell sounds and Summer firstly takes a closer look at the sign that has been eating at her soul since she saw it on the ramp just a minute later. Summer throws it to the outside, not really showing it who’s boss as she didn’t rip it up, yet nevermind! Summer, far too distracted by the sign, nearly gets rolled up right away by Emma, who gets a two count. Emma rolls up Summer another two times and throws an Irish whip in the middle of them, with both of them only getting near falls. Following that plethora of pins, Emma nails Summer with an armdrag, getting the BFF in even more of a spin!

After Summer gets back to her feet, Emma whips her off the ropes and aims to hit a big back body drop yet Summer floats over her sunset flip style. Emma avoids being pinned and uses a pin herself, yet Summer manages to reverse and get the pin she was originally looking for. Note: Re-watch Summer’s face during this pin attempt – hilarious!

The next part of the match is a little off, with Emma hitting the ground more or less before Summer kicked her. Emma boots Summer off of her before Summer regains control of the situation with an Irish whip. Emma avoids a corner splash and then goes for her usual shoulder barge to the gut followed by a pin, yet Summer has Emma perfectly scouted. She knees her in face before shoving her to the outside like a piece of garbage.

The BFFs taunt Emma on the outside before the referee tells The Boss and The Flair to back away. Emma gets back into the ring and she falls right into a wristlock takedown by Summer. Following a cover, Summer locks in an armbar on Emma. Emma breaks free yet Summer sends her back to the mat, prancing around before going for another unsuccessful cover. A vulture-like Summer Rae jumps right back on Emma’s arm, yet the NXT crowd give Emma the energy she needs to mount a comeback… for about five seconds until Summer shoves Emma; a shove so stiff, it was like Emma got hit by a bus. Summer taunts the crowd some more before going for yet another cover.

Summer keeps her onslaught going strong, choking Emma on two consecutive occasions in the corner, knocking stuffing out of her throat with those long legs of hers! We cut to a camera shot of a concerned Bayley, who looks like a lost puppy. She plays innocent and adorable amazingly! Never thought I’d ever use the word adorable in my vocabulary, yet Bayley makes me question myself every time I see her. The gimmick is everything I hate on paper yet she is selling it to me big time!

Back to the Divas in the ring and Emma misses a dropkick attempt on Summer, who has latched herself to the ropes. Just before that, a crowd member tried to start a boring chant. It appears that Summer shuts him the hell down and judging by the rest of the crowd, you’re on your own there pal! After a cover, Emma gets wrapped up in a lotus lock from Summer as we go to a commercial break.

Back from the adverts, or on the internet, a millisecond of black screen, we’re back and Emma is now stuck in a ground based full nelson from Summer. Emma mounts Summer for a brief two seconds in the form of a pin yet Summer rolls back forward and keeps the submission tightly grasped on. Summer yells “THEY DON’T LOVE YOU EMMA!” (well, the boring chant fan certainly doesn’t) as the crowd retaliate against Summer’s mean girl sassiness with cheers to get Emma’s momentum going again. Noticing Emma could be about to mount a comeback, Summer stops the submission and tries to get the pin for the win. When that fails, Summer drags Emma to the ropes, using Emma’s head as a ballet bar. Summer dances her way over to Emma and goes for a headlock, yet Emma canes Summer’s forehead with a stiff kick. Summer quickly shuts Emma back down though with a double axe handle, some psycho clubs to the face and a pin attempt.

Summer declares how she is the better dancer whilst ripping at Emma’s neck with a chinlock. The crowd start to chant for Emma again, much to the chagrin of the BFFs. Emma armdrags Summer off of her before getting her adrenaline pumping with the DilEmma! The BFFs look horrified as Emma nails the brutal looking Emma Sandwich. Now normally, Emma would catapult Summer over her before hitting the Emma Lock yet of course, the sizzling and smart Summer Rae, has this scouted and catapults Emma herself in a different way. That way leads Emma’s face directly into the vicinity of Sasha’s hand. What a slap!

Summer hopes the slap is enough to get the win, but yet again, Emma kicks out! An irate Summer Rae runs off the ropes and although she wanted to charge into Emma, the bubbly Aussie shoves Summer into Sasha who is on the apron. Sasha lands right onto Charlotte and Summer is irate. What she doesn’t know is that she’ll be even more irate in just a second as Emma takes her down and makes her tap to the Emma Lock.

Later on in the show, Emma speaks to what seems like a super-imposed unknown voice backstage in a strange interview where she ignores the question she was asked and starts to ramble on about other things. Yup, Emma definitely isn’t conventional!

Thoughts: Sadly, this was not one of Summer and Emma’s best matches together. There were a few moments of mis-communication and FAR too many pin attempts. Although I’m glad the girls got a lot of time, it seemed like they were unsure how to pace it properly. Summer was knocking pins out left, right and centre and they were totally illogical. It would have been more entertaining for her to work over Emma’s arm some more, talk more trash, or get Bayley involved, yet instead, she went for about a bazillion covers instead. The pin attempts worked towards the end when frustration started to creep in, yet I feel there were too many in the match, at least for me.

I like love Summer’s aggression and heel behavior yet again, especially when she shut the fan right down at ringside. You get him Summer! I also really enjoyed how Summer’s scouted Emma’s usual sequence of moves twice during the match. From a storyline viewpoint, she countered just the DilEmma last time they fought, so to see her scout two moves this time, it shows that Summer isn’t just a pretty face.

Speaking of pretty faces, Charlotte and Sasha looked great and I really enjoyed their antics. Although Charlotte didn’t get the memo about the color co-ordination of the outfits, her new hairstyle makes her look way more feminine and I thought she looked a part of the group. Her and Sasha are improving all the time when it comes to their mean girl antics and I’d like to think they have both read my at sometimes scathing critique and have used it to get better. I definitely think they are improving and although some people aren’t willing to be patient with the faction, I am. You’re welcome ladies.

Now onto next week. I am majorly excited for the live episode! All three matches will no doubt be astounding, and I think Paige and Emma could easily match the standard of the two out of three falls match and the ladder match, and that’s not my bias side talking either! I’m hoping Paige retains and a new Diva debuts! I also hope Paige wears this purple attire as seen on WWE.com. May the gods hear my plea!