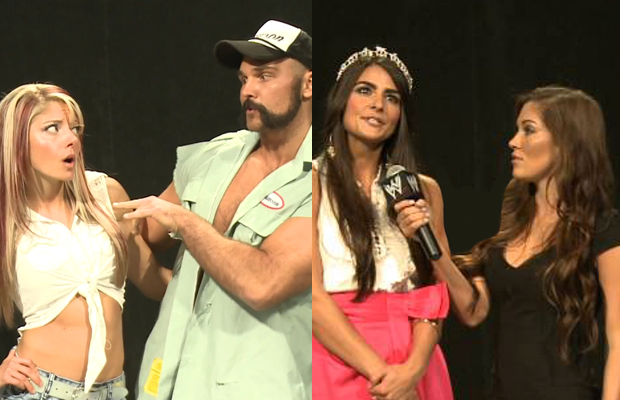 Alexa Bliss, who previously debuted her Nidia-esque redneck character at an NXT live event, displayed the character in two promos: one that featured fellow developmental Diva Christina Vargas and another with Scott Dawson, who she managed at the live event.

In her promo, Charlotte voiced her frustration at living in the shadow of her famous father Ric Flair and claimed to be the greatest female athlete in the WWE’s past, present or future.

Charlotte also appeared in a promo with Becky Lynch, which demonstrated their comedic abilities as they faced off in a Riverdance battle.

Devin Taylor appeared only as an interviewer, speaking with Veronica Lane, who was in a pageant queen persona, all smiles and gracious words.

Christina Vargas, who was signed earlier this year but only recently arrived at NXT, displayed a snobby, privileged character in one promo and interviewed a Superstar in another.

Lana expressed her wish to become General Manager Dusty Rhodes‘s personal assistant, recording an audio blog on her iPad that had her displaying a air headed character that liked to use Instagram and tweet with cliche hashtags.

Kendall Skye, who thus far has mostly served as a ring announcer for NXT, recorded a serious promo that had her reflecting on the anniversary of 9/11.

The videos were eventually switched to private and are no longer available for viewing.

All of these reflect works in progress, so obviously none of these character are set in stone. Even so, it’s interesting to see what direction they’re heading in.

Did you see the promos? Which did you like best?