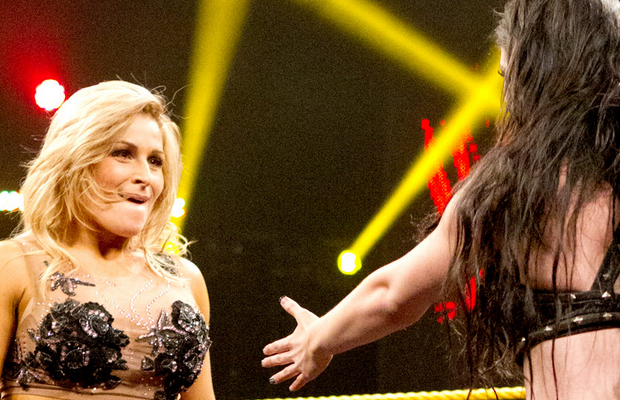 What’s up Diva fans and welcome to this week’s NXT Redux! After a few weeks of backstage segments galore, we’re finally back in the ring on this edition of NXT… and the NXT Women’s Championship is on the line! The future Mrs. @Jack5326 defends the belt against Mrs. Wilson herself, Natalya. So weird referring to Natalya as that! Let’s just jump right into the action before I hyperventilate – you’re going to love this!

Our first Diva sighting of the night is a debut! Ms. Veronica Lane makes her first NXT appearance, looking awesome in an orange dress. Her ring announcing however, needs a little work. Onwards and upwards though! Out first is Natalya, in what appears to be a new silver gown. Looking slick Tal! Paige is out next, not wearing anything new, yet if it’s not broke, don’t fix it! Paige comes out to an unusually frosty reception yet she let’s out her textbook roar and shrugs the crowd’s indifference off. You know you’ll always have me in your corner!

The match begins with an awkward display of sportsmanship before both girls exchange headlock takeovers and headscissors reversals, complete with kip ups. Renee Young makes a fantastic plea for Paige’s sake on why she behaved the way she did last week backstage, showing how Paige could still be a face but feel that way she felt. Awesome explanation. Following a few armlocks, Natalya flips her way out of danger, capitalizing with a waistlock throw.

Nattie continues her offense with an armlock/pin combination yet Paige jumps right back at Tal, knocking her for six with a headbutt. Paige rolls Nattie up from behind for two before trying to pin her foe again with a jackknife cover. Natalya rises up and utilizes a backslide. Paige’s shoulders aren’t quite down and once both girls get back to their feet, Paige grabs Nattie’s boot, forcing her into a tricky predicament. Undeterred, Natalya shows off some of her dungeon instincts, rolling out of the sticky situation before applying a tight leglock on Paige. The pair exchange hairgrabs and elbows before Paige drapes her arm over Nattie’s neck, pulling her into a headlock eventually. Natalya grounds Paige once again with a headlock takeover before Paige’s shifts her hips and gets back to a vertical base.

Paige shrugs Natalya off yet the latter shoulder blocks the former before staring at her; the intensity is definitely building! Natalya uses Paige’s back as a catapult for herself and then she grabs at Paige’s ankles – it could be Sharpshooter time! Paige has other ideas though, retreating to the ringside area as we go to a commercial break.

Back from the break and Paige has gone PSYCHO on Nattie in the corner, delivering blows to the body like a berserk banshee! My kind of woman! Well, maybe not that crazy! The Diva of Tomorrow then channels the legendary Stone Cold by stomping a mudhole into Natalya. Alex Riley explains why Paige has been really riled up during the break and his explanation really added even more intensity to the match. Paige then puts her foe in a sleeper hold whilst Alex and Renee exchange some banter. “Stay on the pulse, brother.” Who knew Hulk Hogan had joined the NXT commentary team? Still not as random as Tensai…

Paige thrusts Natalya back down to the mat as Alex and Renee continue to put over how amazing Paige is. Impressive commentary here. Thank god we don’t have another Mike Adamle on our hands! Paige then locks in an abdominal stretch that she keeps winched in for a short while. She shakes her like a ragdoll in the process – steady on girl! Natalya fights out though, wrapping Paige in an abdominal stretch of her own, complete with her signature heel hook twist. Love it. Paige eventually fights out and hip tosses Nattie whilst the term ‘twerking’ raises it’s ugly head.

Ahem. Moving on, Paige goes ballistic with Natalya in the corner again, whacking her head and kicking her chest in. Paige then uses her sick thrust kick whilst Natalya is on the apron before hitting a few of her “I’M EUROPEAN AND CAN IGNORE THE ROPE BREAK LIKE SHEAMUS” knees to the head. Natalya becomes the first person to reverse this onslaught though, grabbing Paige’s leg and hitting a nasty looking dragon screw leg whip. After laying a beating on Paige, Tal whips the champion opponent and the two clash in the middle of the ring with a double crossbody.

Paige gets back up first yet she misses a leg drop, allowing Natalya to regain control. Nattie hits a clothesline before slapping Paige’s nose off and hitting a snap suplex. The Dungeon Diva then hits an awesome powerslam driver for a two count and frustration begins to sneak in. Paige then tries to mount a comeback with a kick to the shoulder yet Natalya isn’t going down without a fight as she nails Paige with her Nat by Nature clothesline. After a two count, Nattie knows it’s lethal weapon time. Here comes the Sharpshooter! Paige writhes in pain as she crawls closer to the ropes yet Nattie pulls her back into the middle of the ring. It’s a sick fight as Paige refuses to tap. Eventually, Paige rolls Natalya head first into the turnbuckle, leaving the challenger dazed. After a moment to catch their breaths, Paige hits the Paige Turner out of nowhere and pins Natalya clean. The two embrace after the match, having earned each other’s respect.

Thoughts: This could be a match of the year candidate, I loved it! It was intense, passionate, back and forth, unpredictable, physical, rough, brutal and told an amazing story. Paige was desperate to keep the gold and impress the veteran and the veteran didn’t want to be outshone by the ‘rookie’. The match was not traditionally booked and I loved how back and forth it was. It was refreshing and so unpredictable. Paige’s Paige Turner was a definite highspot, due to the fact it came out of nowhere and it because it has never looked better. Natalya sold it superbly and for once, the move looked genuinely dangerous. Oh, and I loved that Nattie brought back the “YEAHH BABY!”

Also, Renee Young, I can’t sing your praises anymore than I already have. She is witty, knowledgeable and a breath of fresh air. Her performance was nearly as good as the match!