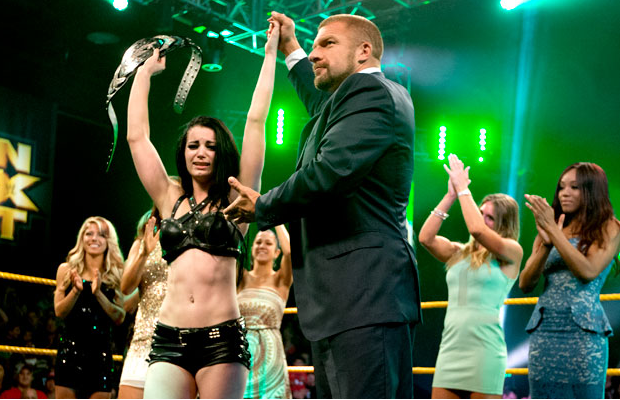 What’s up Diva fans and welcome to this week’s NXT Redux! Now, I know I normally bring you the less relevant WWE and TNA action (sorry Xplosion), yet as Bobby has an increased workload in his life right now, I will be taking over the wild reigns of the NXT Universe. I’m going to have a lot to handle what with a “Diva of Tomorrow”, a female version of Psy on a little less happy pills, Snoop Lion’s cousin, a fantastic, gymnastic nature girl and starstruck bundle of awkute (my new portmanteau of awkward and cute) on my hands, (not to mention, this is all happening whilst Summer School is in session) yet I’m willing to take it on and mark out majorly on the way!

So what’s up this week? In case you’ve been living under Mount Everest for the last decade, then let me explain! On the week’s NXT, we have the NXT Women’s Championship Tournament Final match pitting the biggest rival to the Harlem Shake, Emma, against my ultimate favorite Diva (nothing to do with the fact she follows me on Twitter – pop pop!) Paige! Did I just make a reference to NBC’s Community? Woo! Getting back on track, this match is the clash of two of, if not the two most popular people in all of NXT, so I am so bloody excited to get stuck in to this. What a week to start, ey? If you’re like me and you haven’t read the spoilers, then like me you’ll be lying, yet, after hearing all the reports about this match, I cannot fathom anymore words to contain my excitement. Let’s get on with it!

NXT begins with a dramatic video package hyping the match. Popcorn at the ready, folks! We see what happened two weeks ago when Emma defeated Summer Rae and was then saved by Paige following Summer’s after-match attack. Both finalists talk to the camera in-front of a regal purple background, (how good does Paige Paige look in-front of it? DAYUM!), with Paige saying: “I’m a fighter. She’s the dancer.” Please allow me to pick myself off the floor as I have literally just marked-out so hard at that line, I’m currently sat on the floor shaking as I type this. That was so epic. God, my fangirl-ing for Paige is at an unhealthy level. The package ends with a zoom towards the coveted prize that is up for grabs as I grab an air-mask to help my hyperventilation. Cue the titles!

After the amazing titles that feature out two finalists tonight and Summer, we’re in the Full Sail arena and we go to Byron Saxton who announces that the tournament finals will be kicking-off the show. Emma’s music is first to hit, and out she comes in a new citrus-fresh lime green attire. The crowd are loving the Emma dance and I in particular love the 55 year old man in the yellow t-shirt in-front of the Paige painting owning it and Diva Dirt NXT spoiler provider Jordan in the front row werking IT. When did I just turn into Cameron? Anyway…

Emma got a fantastic reception, yet it still wasn’t as good as Paige’s, who comes out to a raucous response. After screaming her way to the ring, both girls stand-off ready for their special in-ring introductions. THIS IS BIG PEOPLE! Emma gets a mixed response from the crowd including a few boos, which really surprises me. Byron once again butchers the pronunciation of Paige’s hometown, but hey, I guess it’s a gimmicky thing now. I won’t let it bother me. Yet if he does it again, I will HUNT HIM DOWN. Ahem.

We’re underway and the girls savagely lock-up, rebounding to the ropes and the corner. “LET’S GO EMMA! LET’S GO PAIGE!” chants erupt and you can tell this is going to be good! Following a couple of quick covers from both combatants, the Divas tie up again, with Paige coming out on top by transitioning into a side headlock. Paige goes for another cover after a shoulder tackle before going for a scoop slam, which Emma reverses. Emma goes for one of her own which Paige reverse as well, shoving Emma towards the turnbuckles. The former “Anti-Diva” runs at Emma, who practically knocks Paige’s teeth out with an elbow. The bubbly Melbournian rolls Paige up with a swift schoolgirl which I thought looked gorgeous (who knew one could look so good?) yet it only gets two.

The pair then tussle in the corner, which leads to Emma hitting a sunset flip style pin for another two count. Emma goes for yet another cover following a wristlock takedown and still, Paige kicks out. Emma decides to work on the arm and she grounds Paige with a hammerlock, leaving the “Diva of Tomorrow” in a world of hurt. Paige tries to get out of the predicament by ripping Emma’s weave, yet a headbutt is what finally shrugs her off. Following another cover, the girls have a backslide version of a test of strength, with Emma getting the best of it as she ends up writhing Paige with the DilEMMA – lovely! Emma dances a little yet that appears to be a mistake as Paige thrust kicks her out of the ring as we go to commercials!

We’re back and Paige is still on the offense, scraping the scalp of the EMMAlution leader. Changing to a headlock, the Norwich native is still in control as the crowd get rowdy once again. Paige then sticks her knee into Emma’s back, letting out her patented scream as Emma’s screams in pain. Paige rolls Emma into a Crucifix pin for two, before clubbing her on the back and ramming her throat first into the top rope, scrambling for a cover immediately after. The “Enchanting Raven-haired Lady” then gets her perfect on and hit’s a great fisherwoman suplex for a count of 2 and 7 eighths! Paige then throws Emma by the hair into the corner like she is trash before stomping a mudhole so hard through Emma, I’m surprised there isn’t an actual hole. Desperation might be starting to creep in for Paige, as she goes for two successive and ineffective covers.

Emma then starts a sick comeback by ramming the back of Paige’s skull on the mat, following that head trauma up with her amazing bottom turnbuckle crossbody – love that move! Following a series of pin reversals, Emma stays on the offensive by clubbing Paige on the back and kicking her in the ribs before applying a headlock a a really brutal looking angle. Paige breaks out with some elbows, yet she gets knocked down again by an elbow of Emma’s. Emma then reverts back to a submission, locking Paige in a tight waistlock.

After a long time having the life squeezed out of her, Paige makes it to a vertical base, ramming Emma into the corner and delivering a flurry of elbows to the head! Paige then inventively gets Emma to the mat and locks in her stunning texas cloverleaf submission. The commentators hype this up so good, can Paige win here?

No! We’re getting a lot longer match than this!

Emma powers out, coaxing Paige into a small package in the process. Again, I won’t repeat myself. This is going on for a little longer! *Drools* Emma goes for the Emma Lock, yet Paige escapes to the apron. Paige then does her “Sheamus move” in that as she’s a European Brawler, she must have a fun crowd interaction move in which she beats the crap out the opponent. Like Sheamus’s clubs to the chest, Paige has her knee strikes. Mark my words, the WWE Universe will eat that up when it’s followed by a cheeky scream! Then, something amazing happens. It appears that Paige has drank some Red Bull as she thinks she has wings; she’s going up top! Before Paige can make the most of her uncharted territory, Emma whacks her in the face. SUPERPLEX!

I was left with total goosebumps as Emma and Paige are probably left with back welts after that sick spot. Emma tries her bloody hardest to make it over to her foe, yet when she does, she only gets two. “THIS IS AWESOME!” chants flood through the building and I agree 100%. Regardless of the leg being hooked, Paige has enough strength to drag it to the bottom rope, cancelling Emma’s pin attempt. Emma picks Paige up yet she’s unable to do anything as Paige rams her with not 1, but 2 of her thrust kicks before hitting the Paige Turner.

…………We’ve already watched the end before you wrote this part Jack, get on with it!

Paige better be wearing waterproof mascara as the tears are flowing. Showing some respect and support, Alicia Fox, Bayley, Charlotte, Kendall Skye, Lexi Kaufman, Rosa Mendes and Sasha Banks all come out to celebrate with Paige – classy stuff ladies. Then, in an equally classy yet more shocking display, TRIPLE H comes out and raises Paige’s hand. Paige closes the segment by screaming “I did it.” You certainly did, and you deserved it.

Thoughts: There was no blood, but there was a hell of a lot of sweat and a shed load of tears, and that was just me! This match was absolutely fantastic, to put it bluntly. I loved how early on, both girls kept trying to get quick covers; it showed how important the belt was and how they would try anything to get a win. In my honest opinion, it started out a little slow and if I’m being picky, I would have like to have seen some outside action, yet other than that, I cannot complain. The match got so intense from when Paige got out of the waistlock and applied her cloverleaf finisher. I read the spoilers that said she won via Paige Turner yet even I thought that that must have been a mistake and she won via submission. To then get more time and a great superplex plus Triple H, what more can we ask for? Shout out to Lexi as well; you made your debut girl, well done!

The belt is black with studs for god sake, so it was always going to be Paige’s, yet I’m so glad she was given the accolade of getting it first. I’ve been a follower of Paige’s career for quite some time and to see her raise that belt and pose with it on WWE.com, it makes me a proud fan. Saraya-Jade Bevis, congratulations.