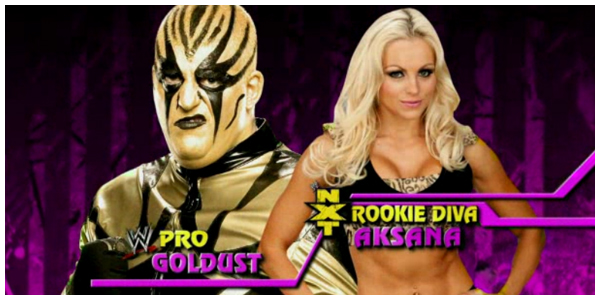 NXT season three kicks off next Tuesday night, but before that, we’re helping you get acquainted with the cast of NXT 3! Today, we look at Aksana, who will be paired up with WWE Superstar, Goldust.

Profile
28-year old Aksana, real name Zivile Raudoniene, is a familiar face on the bodybuilding and fitness modeling circuit. The Lithuanian was signed by WWE sometime last year and has recently been hosting ‘The Aksana Show’ on FCW television.

Obviously, from the clip above you will have learned that Aksana is freakin’ hilarious! “So nice to see you… whatchu gonna say.” Need I say more? Oh, go on then… “Waylish.” “What kind of girls you like.” Aksana’s amazing comedic value paired with Goldust will be gold!

Here is Aksana in a match. Okay, perhaps not the most impressive in-ring skills and if this were purely a wrestling competition, she would be eliminated fairly quickly. But it’s Aksana’s silly charm that makes us love her. In fact, why not just share another video of her talking?

Needless to say, if the Diva Dirt team were to vote with our laughter lines, Aksana would get our vote. While we don’t think she should win, we hope she makes it to the end solely for entertainment purposes. And now some party favours…