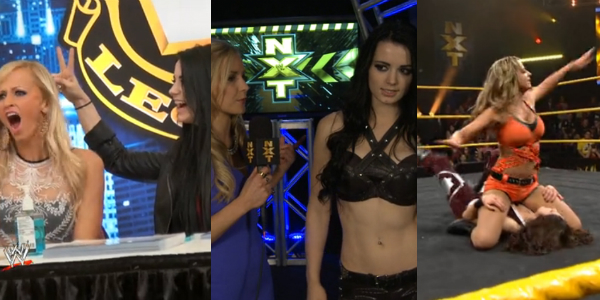 Hello everyone, and welcome to this weeks NXT Watch. Unlike last week, I’m back to my old chipper self again as I have no worries to be had over mixing up a certain set of twins that paid a visit to the golden roped show, therefore I am back and better than ever. While the sheer statement of me being back in the first place will probably be enough to send some hurrying for the X button to close this tab, I thank the ones of you that continue to stand by through all the random, sometimes later regretted things I say.

Ooh, and unlike last week I’m actually writing this at a normal hour of the day so perhaps I’ll make a bit of sense.

When we last left you, Summer Rae and Emma each attained an interview. One explained the issues Divas have with curling irons during a match, while the other sort of maybe stumbled a little and showed she’s not quite up to date on current pop culture phenomenons. If you recall, my only (serious) points of non-positivity stemmed from me wanting to see them mix it up a little with Summer Rae as opposed to strictly interviews, as well as see Emma be spotlighted like the dancing queen I know and want everyone else to love. Well it turns out I now have reason to believe whoever is behind this show reads my recaps and wants to please only me because both of those came true and I kind of want to reward whoever it is with gift cards to both Applebees and Red Lobster for their doing.

In case you’re still unsure of what exactly happened, we’ve got a lot to cover. Before we delve into anything though, please take a moment of your time to watch this utterly fantastic video package showcasing the NXT Superstars and Divas as they ventured off to New York/New Jersey a few weekends ago for WrestleMania and the attached Axxess events:

Never fear, we’ve got more footage following the video package so keep the momentum going by continuing on to the following interview with Sum– wait a second, it’s the Anti-Diva, Paige to save the day by gracing us with her addictive British accent. We head backstage to see everybody’s favorite interviewer, Renee Young standing by with the one and only Paige herself! She wants to speak on Summer Rae. “What’s going on here?” chimes the perky blond. Paige isn’t one for excuses, so she’s not buying that Summer’s hair had anything to do with running out last week. All Summer’s done since she started actively competing is run. Whether it’s running her mouth or from a match (great line), Paige is sick of it all. She’s not going to stand by and let Summer run or talk any more! She wants a one on one match whether Summer likes it or not, but truth be told, she doesn’t think Summer has the guts to accept her challenge. That’s the reason she feels all Summer has time to do is interview after interview when she’s not in the building.

Yes, that was me trying my hardest to convey what takes place next, as Summer Rae channels the segment that started this entire rivalry by blasting Paige right over the back. She steps over the fallen Brit and screams out “Who’s running now?!” From there, Summer lets Paige know that she accepts her challenge. One things for sure, Paige is pissed, and she’s going to be even more pissed in that one on one match so I wouldn’t want to be Summer Rae right about now.

This never ending hand-me-down theme song hits, and out comes Bayley to begin the following match. While I thank NXT for giving Bayley an entrance this time, I hope that once she gets a titantron made and everything they swap her theme out because at this rate I’d take one of the thirty songs Sasha Banks used before finding her current one. Although… if I had my choice of anything, Bayley would use this gem (although I’d cut the entire semi-erotic sounding intro that comes prior to 33 seconds in). Alright now that my obsession with theme songs has gotten itself out of the way, let’s get back to the action at hand because what comes next can only be described as a revolution!

Once Bayley’s music stops, the addiction that is… well I guess I can only call it the theme of Emma since it has no lyrics. Whatever it is, it starts up and the crowd (as well as myself) jump for joy. Out comes Emma, flailing her arms around like only she can. The camera pans to a brilliant sign in the crowd that actually has movable arms to coincide with the Emmalution! From there, Emma… wait what? Emma Successfully flips into the ring and actually gets a pop from the crowd for doing so. As the music dies down, the crowd perks up with an Emma chant to boot.

The bell sounds as the two lock up and Bayley takes control with a waistlock. Emma fights out by running off the ropes, but she then gets planted in the face with a dropkick. Emma tries to slide out of the ring, but Bayley drags her screaming self back in. Emma with a kick, but Bayley then runs off the ropes and goes for a sunset flip… which results in Emma sitting down on her and starting to do the dance! The crowd absolutely loves it, but unfortunately, the dancing does sort of hinder Emma’s advantage of being over Bayley by not hooking the legs, thus Bayley rolls through into a pin of her own for a near fall. Bayley hits a nice faceplant, but the crowd is not here to see Emma being punished.

Bayley applies a chinlock, as the crowd tries to rally both competitors up. After a bit, Emma gets punched in the back and sent into the ropes, but a sidestep allows Bayley to get faceplanted and locked into a Tarantula! Emma is forced to break by a five, as Bayley falls into a seated position in the corner. Emma rolls through to the other side and charges forth with a running crossbody! She then catapults Bayley over and applies a Muta lock for the submission victory! The perky theme starts up again, as both Emma, the sign, and the crowd partake in their own respected versions of the Emmalution! How Emmazing.

Thoughts: Sorry, I can’t stop watching that WrestleMania video package, but I’ll try to long enough to gather my thoughts. First off, I’m insanely happy with NXT this week. I’d probably call this my favorite overall week in at least a while. Granted, that could be because what I personally wanted to see happen did in fact so, thus I get if my opinion isn’t shared. But for me, this was so much fun to watch (over and over).

I love that they switched up the interview first and foremost. As soon as they panned backstage, my first reaction was simply nothing more than “PAIGE!” Not that I don’t enjoy Summer’s interviews, just more of what I said last week about wanting to see something different since they were starting to blend. I still want to see another fun segment with them before their match since I believe next weeks show is the Champions Clash therefore the match at least holds off for another two weeks, but I’m grateful for getting what we got tonight. As soon as Paige issued the challenge, my mind went “C’mon Summer… run out and ambush her.” While I know it’s weird I talk to myself when watching, once that kablam sound went off, I had to pretty much throw up my hands and say job well done to everyone. Paige is seriously the total package, and I don’t normally say much about her because of how much is said in general that I feel like you all already know it. But tonight she kind of solidified that not only can she wrestle, she can also act and perform in interviews since I don’t recall her getting that many before. Nonetheless, I really hope that when she is called up (or in my opinion, called down) to the main roster, she’s able to do something worthwhile for the division as she could be so killer if they put the effort into her that they have thus far in NXT.

Emma, Emma, Emma. What do I say? I’m thrilled her time is finally coming and that the crowd warmed up to her. It’s common knowledge that Paige is pretty much the big crowd response Diva wise at NXT, so it was great seeing another Diva get something just as equal with all the chants and cheers and even signs. (That Emma sign cannot be topped, and if it can I need proof immediately). I thought the match was great overall. It didn’t feel short to me like Bayley vs Paige did, and both ladies got to show some more of what they could do. Emma did her dance more frequently and I know I said in her match with Aksana that I almost felt as if it was too much, but here it felt just right. When she has the crowd so behind her, it comes off way better on TV so by God do the dance as much as you want.

I do wish Bayley could get a little bit more invested in her, but much like Emma, Paige, Sasha, etc. I’m sure her time will come a little down the road. I find Bayley to be something special who just needs a boost in the creativity department like a snazzy theme, titantron, and maybe gimmick that helps her to stand out because my only problem would be I don’t really know who she is as a character yet. That’s fine for now since she’s new and isn’t being used really as a prominent Diva at the moment, so I’m just hoping over time once she gets to be “America’s NXT Top Diva”, she gets the added oomph that I’m clamoring to see put into her character as she’s got the wrestling down pat (of course). Perhaps some interviews with her would help so we get a feel of who she is behind the microphone, but of course like I said, there’s time for that as no Diva in NXT seems to really start off with the momentum until they’ve either lost a few times or performed a bazillion years of ring announcing duties. Let me change my tune and just be happy Bayley is at least getting to show her stuff or next thing I know she may become a ring announcer and that would not make me happy as I’d rather see her in the ring.

Phew… okay, as always I apologize for the length but it seems like once I start, I can’t ever shut up until I restate myself twenty times or overly praise everyone. Until next week — peace!