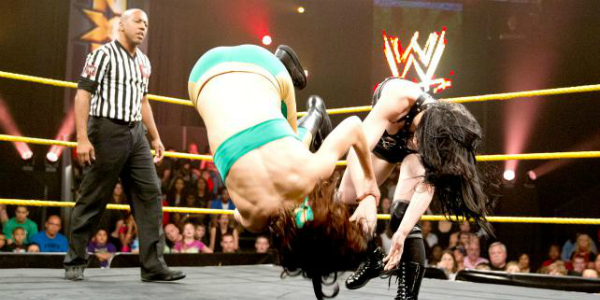 Good day NXT universe and welcome to this weeks recap of all the latest happenings from our trusty developmental program. If you’ll recall, last week the ever so coordinated Emma stepped up to the Summer school plate, but unfortunately for her, a deathly spin kick sent her packing. After the match though, Paige made her triumphant and overdo return as she chased Summer Rae outside the ring and to the back where I’m sure the always comforting Renee Young was standing by to console and offer advice.

This week, Renee is back… but this time it’s NOT with Summer Rae. It’s with Audrey Marie, who has some choice, cryptic words for her arch rival, Sasha Banks. Also, we are treated to the debut of Bayley, which is still a name I can’t get behind (seriously, it needs a last name) as she tries to make a big statement by taking down Paige during the anti-Diva’s return bout to the yellow roped ring. Will Bayley succeed? Or will Paige revert to her usual method of “Arrive. Annihilate. Exit”?

… Don’t think I’m done yet with the questions. Will Summer Rae make her presence felt? Will Audrey Marie step foot in the mind of Sasha Banks with her intimidation?! Will Renee Young somehow wander the NXT halls and bump into a male superstar that of which she falls madly in love with and becomes an on screen girlfriend to?

Surprisingly, these are things I actually think about. But I’ll save you the trouble from hearing any more as we begin……….. now!

Backstage we go, and here comes everyone’s favorite Canadian interviewer, Renee Young. The savvy journalist welcomes her guest, Summe… oh wait, Audrey Marie! Some new blood for the interview area, and I love it. Audrey steps up into the scene, as Renee gives us a rundown of the events circling Audrey and Sasha’s past. From love letters to attacks to match losses (to Naomi), Renee is extremely inquisitive in her quest to find out just why we haven’t heard from Audrey Marie lately. Now, to be honest I think we just busted Renee on not watching Raw or SmackDown because if she did, she would certainly not need to ask why we haven’t heard a Diva speak considering the odds of them being given a microphone are about the same as mine are in hitting Powerball. But I’m going to give her the benefit of the doubt and claim nerves took the best of our fancy friend.

Audrey lets us know that it’s always calmest before the storm… and now that Sasha knows she’s coming, there’s STILL nothing she can do about it. This seems to entice the former cowgirl, but instead of letting us pick her brain a little more, she simply walks off and leaves Renee with a pretty short interview. Quick, someone find Summer Rae backstage! Provided she will lower herself into granting we peasants an interview, I’m sure Renee would be able to snag some juicy information from the first lady.

… Oh dear God not this theme song again. I truthfully believe “Feelin’ Me” has been passed down from generation to generation more than any other song in the history of wrestling. I’d list all the names, but I’m sure I’m forgetting someone so I’ll spare you. Poor Bayley gets the short entrance, but I’m still excited to see her debut because she’s wonderful. Her opponent will be the fan favorite with the raven hair, Paige! The bell sounds as these two lock up and Paige tosses Bayley right away. Bayley with a wrist lock, but Paige rolls through and tosses her once again! A roll up gets a near fall, as she follows it up with an Irish whip. Bayley with a mat slam, but Paige kicks out instantly from a pin attempt.

Bayley now has an arm lock applied, as she reverts it into an even cooler looking one using both arms AND even Paige’s jaw. She changes it into a crucifix, but Paige now attains the upper hand with a sharp kick and a hair toss. Bayley lands seated in the corner, which means it’s time for the kicks of doom! “Uh! Uh! Uh uh uh uh”, chimes Paige. She sends Bayley into the opposing corner, and as she runs forward, Bayley looks to get a boot up. Unfortunately for her, Paige catches her foot and uniquely uses it to slam her face first and lock in the cloverleaf! Bayley taps out, and as Paige celebrates, Summer Rae runs out and attempts to cheap shot her rival. Paige catches her in time though, which leaves Summer Rae to walk back up the ramp and make her exit.

Thoughts: There’s not much to say about the actual interview due to how short it was, so let’s throw positivity and say that I liked the cryptic-ness in Audrey’s voice. It leaves me hoping we get some fun backstage segments in which Sasha is forced to pretty much always look over her shoulder as she doesn’t know when Audrey’s going to be there. This could really enjoyable if they take it down that road, but I’m not sure entirely what they’re going to do so all we/I can do is hope and pray!

I loved the match, a lot even. It was so fluid and I felt that even though the time was way too short, the two meshed so well together and left me clamoring to see a longer showing. I’m not upset with how Bayley debuted because if you think about it, everyone pretty much debuts that way unless you’re the first lady of NXT. Paige lost her first few matches, Emma did as well, Sasha, Audrey, etc. Most didn’t even get entrances either, so in time I hope to see Bayley get more but for now, it’s definitely okay. The inclusion of Summer Rae at the end was perfect, and keeps the feud continuing. I would still like to see it go on for a few more weeks before they have their big blow off match against one another because I think there’s still a little bit more that can be done to add hype. They haven’t met yet since Paige’s return, so a multi diva tag would be a good way to pit them against one another without it being the end of their feud. Truthfully, I would also love some backstage segments… but that’s pretty much what I say about everyone as I thrive on fun antics.

Alright, until next week — peace!