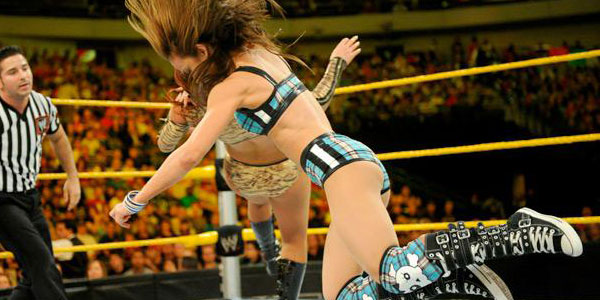 Welcome to another exciting edition of the NXT Watch!~ There may be a new day and time that the show airs, but never fear, for our rivalry between perky spitfire, AJ, and Sherri Martel circa AWA gear wearing, Maxine, is as hot as ever. They face off once more tonight to see who can better the other in one on one competition. Will AJ prove she can best her foe here tonight? Or can Maxine continue her reign of dominance as NXT’s top Diva? Let’s find out!

As we are in the midst of a verbal argument between Derrick Bateman, Maxine, Titus O’Neil, and Percy Watson, Matt Striker comes out and announces that Maxine will face AJ coming up next! We return from a commercial for the upcoming ladder match DVD (featuring an OVW classic between Beth Phoenix and Katie Lea) to see Maxine snap AJ back first on the second rope in an awesome looking neckbreaker. She covers for a two count, before throwing AJ where half of her body is on the ring apron and the other half in the ring. She bends AJ over the bottom rope until she reaches the appropriate count to let go, before viciously pounding on the plaid clad diva’s chest.

Maxine screams at the referee and drags AJ back to the center of the ring for a one count, before applying a beautiful dragon sleeper as the crowd begins to chant “LET’S GO AJ”. William Regal informs us about Maxine’s cousin, as AJ begins to fight back with punches to the face. AJ tries to Irish whip Maxine, but she counters and drops AJ throat first on the top rope. Maxine slams AJ face first into the canvas, before applying a choke hold where she digs her knee into the back of the underdog.

Maxine picks AJ up and Irish whips her into the ropes, but AJ comes back with a kick to the face. She tries for some momentum, but Maxine stops her with a running elbow to the face for a close count. She picks AJ up and hits a nice snap suplex for a two count, before going back to the Dragon Sleeper as Jack Korpela questions Maxine’s ulterior motives in her relationship with Derrick Bateman. AJ starts to fight back, but Maxine is too powerful in her dominance.

She tosses AJ into the corner, as we find out Maxine dyed her hair red because John Laurinaitis likes red heads (oh lord). Maxine becomes relentless on AJ, just beating her down. She climbs to the second rope and begins punching AJ in the face, but she takes her head off the game for a second to play to the crowd, which is just enough time for AJ to throw her back first into the canvas. Maxine gets to a vertical base, as AJ climbs to the top rope and leaps off with a beautiful crossbody for a one count.

Clothesline by AJ, followed by a slide under the legs into a reverse spin kick! Two count for AJ, as both women try their hardest to get a victory. AJ begins fighting back with an assortment of punches, until the devious Maxine capitalized with a hair pull backbreaker. She sends AJ into the corner and goes for a roll up but AJ rolls through it and lands a SICK shining wizard for the victory! AJ celebrates as the dance worthy theme hits, and Maxine seems disgusted with what has just transpired.

Thoughts: Another stellar match between AJ and Maxine. They probably have some of the best chemistry amongst the divas for me as I enjoy all of their matches together (which most of the time proves challenging for me when its a match that happens so frequently). Part of the positive is that they actually get a good length of time to wrestle each bout, which helps tham stand out from the usual 2 minute tag match on Raw. I would like to see Kaitlyn, Aksana, or Naomi come back to NXT, but I’m really enjoying seeing AJ and Maxine go at it.