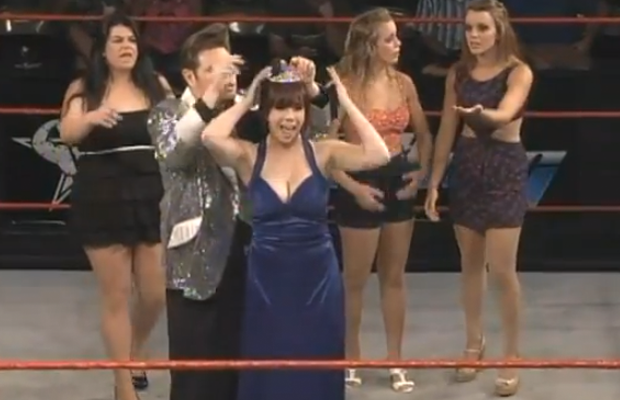 Greetings OVW fans, and welcome to another edition of the OVW Write-Up. This week we’re seeing the opening round of the Miss OVW contest.

Before we get to the first competition, we see poor Lylah Lodge backstage with one of the Blossom twins, confessing that she’s nervous about competing in the contest. She’s not like the other girls, she says.

The Blossom assures her that she’s strong and can do this, giving her a high five.

Later, it’s time to start this circus act, so we join all of the women of OVW (for some reason, I can’t bring myself to call them Femmes Fatales) in the ring with a guy who’s wearing a jacket and a hairstyle that I’m sure is designed to make me comment on it, but I won’t. Take that, OVW.

Shiny jacket guy is holding a tiara that he probably picked up at the local Claire’s. He says tonight, the women will be asked a series of questions.

Jessie Belle goes first. She’s asked which celebrity best mirrors her own personality, and she answers with Daisy Duke. You know, the fictional character from Dukes of Hazard.

Ray Lynn (who I believe first appeared on OVW last week) is asked which celebrity she would invite to dinner. She names some fitness model. Riveting!

Lylah is asked, appropriately, what she likes best about herself. After some hemming and hawing, she says that she’s really strong.

Nikki St. John is asked for her definition of success, which she claims is herself. Every woman in the building, she says, wants to be her, and every man wants to be with her. It’s Sable reincarnated, ladies and gentlemen!

Hannah and Holly Blossom are summoned together, because loltwins, and are asked what they would change about the world. The girls can’t seem to decide who will answer the question, and Taeler Hendrix takes the opportunity to shove them aside and take their spot. She says that this is all just a formality, because she’s already won. She tells swoopy hair guy to put the crown on her head and he does so, because apparently she’s so damn persuasive.

Taeler gives an acceptance speech, telling Women’s Champion Trina that she can stop borrowing her belt now. Lei’D Tapa then rips the microphone out of her hand and shoves her to the mat. Trina apparently wanted to hear what Taeler had to say, because she shoves Tapa.

Taeler tries to get in a few more words with Trina, and while her back is turned, Tapa goes for a kick. Trina dodges it and hits Tapa with a hell of a forearm, and she’s out for the second week in a row!

Thoughts: As you can tell by the derisive tone in which I wrote this Write-Up, I think this whole thing is a joke. There are better ways to advance the Trina/Tapa feud than this, and there are definitely better ways to use the women of OVW than these ham-fisted attempts at putting over their characters.

There are ways to make something like this work. The WWE did goofy bikini and talent contests with the likes of Jillian Hall and Nidia, after all. Right now, Miss OVW just seems like an excuse to put as many women on TV as possible. Everyone besides Tapa, Taeler and Trina are forgettable here, so no one else is benefitting from it.

So far, I’m not looking forward to the rest of this contest. Of course, OVW could always change my mind, but this segment makes me dread what’s yet to come.