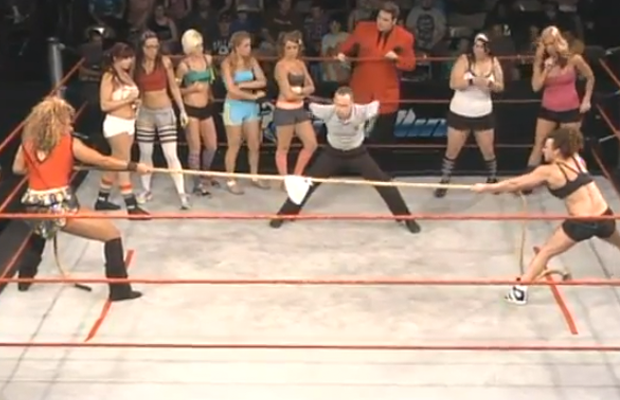 The second competition of the Miss OVWcontest is upon us, and we can only hope it’s not as cringeworthy as last week’s “question and answer” session.

As we jump right into the ring with the women of OVW, we see that they’re dressed for some type of athletic competition – just not, you know, wrestling.

This week, we have a test of strength. Two women at a time will play tug-of-war, and the loser will be eliminated. Lovely Lylah is up first, facing Nikki St. John. She eliminates Nikki pretty easily.

Lylah faces new girl Ray Lynn next, but Rachel practically flies across the ring and is eliminated. Taeler Hendrix‘s up next, still wearing her Claire’s tiara. She tries to intimidate Lylah with some trash talk, but she’s soon pulled across the ring, flipping backwards. She too is no match for Lylah.

Hannah and Holly Blossom once again can’t decide who will compete, and argue over who should go next before Lei’D Tapa comes out of nowhere to shove them both over. She takes up the rope and eliminates Lylah easily.

Trina decides to take on Tapa, grabbing the rope. The two start tugging, and it’s an even match to start with. Tapa starts to be pulled across the ring, but before she can be eliminated, she clotheslines Trina.

Things get even nastier when Tapa takes the rope and wraps it around Trina’s neck. She tosses Trina around the ring repeatedly, choking her before finally tossing her to the outside, where the referees remove the rope from Trina’s neck. Finally, Tapa stands tall again.

Thoughts: This was definitely better executed than last week. The challenge was entertaining, and we saw some shocking brutality that really sold the Tapa/Trina feud in a way that no magic forearms or DDTs could.

I will say, though, that the Miss OVW segments seem to be taking on a pattern: showcase the goofiness of the rest of the division, and end it with a Tapa/Trina brawl. Hopefully they can mix it up a bit next week. Clearly, neither Trina and Tapa are going to benefit from being crowned Miss OVW, so they need to start giving Taeler a challenger, since she seems to be the only person really determined to win the competition.