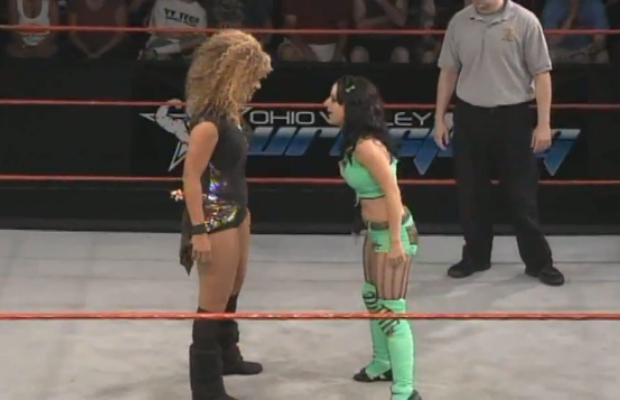 Hello fellow OVW brethren, lend me your eyes for this upcoming recaplet of all things OVW related. Well, should I say OVW female related. When we last left you, Taeler Hendrix became the first woman to defeat Trina, but that didn’t mean there wasn’t a haze of controversy surrounding it. First, she used Heidi Lovelace as a human shield of sorts in order to distract the champ long enough to be tossed into a ring post. Secondly, she then used the ropes during the winning pin attempt in order to secure the victory. We all can assume Heidi won’t be happy with this, but does Taeler have what it takes to weasel her way out?

Also, Lei’D Tapa made her thunderous OVW debut with a very impressive victory over Jessie Belle, but that didn’t seem to impress just us. It also looked to charm the pants off of Epiphany‘s manfriend, Eddie Diamond… only Epiphany doesn’t quite know it just yet. Will there be a cause for concern between the two of them over this crush?

All your answers and more come this week as Lei’D Tapa faces off against Heidi Lovelace, plus we are treated to a trifecta of backstage segments to explore the further happenings of the OVW womens roster involving the two women mentioned as well as Epiphany, Nikki St. John, and the dastardly Taeler Hendrix herself.

Backstage, we spot an angered Heidi Lovelace as she turns to confront Taeler Hendrix about what happened last week. Taeler seems confused as Heidi explains the situation, but she apologizes for Heidi perceiving her actions as her not caring. It was simply the fact that she’s been under so much stress, she just acted on a spur of the moment ordeal. Hendrix promises that as soon as the stress is over, she’ll be back to her old self… but Heidi’s not having it. She thinks this duo is very one sided in Taeler’s favor. Hendrix, however, says to stop listening to what everyone else is saying. She makes Heidi a deal in that if she can win a match against Lei’D Tapa tonight, she’ll get all the attention of Taeler’s that she rightfully deserves. (Side note: All couples out there take note — only offer your spouse attention if they can defeat one of your arch rivals in a fight). The proposition works on Heidi, but as she leaves, Taeler makes a few faces to herself in disgust at the act she’s playing up.

We head to the back once more as Taeler converses with her true friend (that shares the same evilness as she), Nikki St. John. Nikki asks if Taeler’s going to support Heidi the hobbit so she thinks they’re really together. Taeler laughs it off and says she doesn’t need to even do anything as she’s got Heidi wrapped around her finger so much already. Heidi thinks they’re watching the match from the back, so Taeler instead invites Nikki to go get some cosmo’s. As they leave though, the camera pans towards a cracked door as The Assassin stands listening to their every word… prompting this sound effect to play in my head.

Out to the ring, Heidi Lovelace makes her upbeat entrance for competition, before she’s interrupted by one of my new favorite theme songs in that of Lei’D Tapa! As soon as both women are in the ring, the bell sounds and we get things underway with Heidi saying she’s not scared of Lei’D. Tapa screams, but Heidi slaps and kicks! Tapa isn’t affected though, as she hits a huge headbutt and begins to dominate the fan favorite. Heidi gets sent into the corner, but she dodges an attack and hops on Tapa’s back! Unfortunately, this doesn’t last long as Lei’D flips her over and begins to viciously slam her all over the place. Lei’D Tapa sets up for her finisher, but Heidi fights out! Again, unfortunately, Tapa just turns it around and slams her to the floor. She picks Lovelace up, tosses her off the ropes, and hits a sick boot to the face! Lei’D applies the Tongan Death Grip, picks Heidi up, spins her around, and drops her with the Tapa-TKO Stunner (that Heidi sells amazingly) for the victory!

Backstage, Jessie is seen “talking” on a phone… but moves into the view where we can see the phone is on the home screen where all the icons show up to navigate where you want to go. From there, Eddie Diamond is seen chatting up Bobbi Bardot until Saint Epiphany walks into the scene screaming that he can’t seem to find this phone that has a picture of some chick on it! The holy figure demands to know just who this woman is, as she clearly was too busy taking care of her worldly duties to pay attention to some match. He reveals it’s Lei’D Tapa, as we know, but Epiphany is not having it. She wants to know why Tapa is on her mans phone, and he (seemingly quick and on the spot) comes up with the excuse that he was studying her because she may have to wrestle Lei’D one day and he wants his girl to be prepared. That’s still not flying, judging by Saint Epiphany letting out a “Boy shut up!” She heads off as he chases behind her and we end the segment with Rob Terry being attacked in the knee.

Thoughts: We’ve got lots to discuss tonight, so we shall kick off in order with the backstage segments. I’m still enjoying the Heidi and Taeler storyline, although I don’t feel the same excitement about it that I did at first. It’s understandable though, because I don’t think there was really a way to get Taeler to go along with Heidi truthfully without some backstabbing involved, but it takes some of the fun out of it for me as a viewer because I know what Taeler’s really feeling and I’m just waiting for Heidi to sort of catch up if that makes sense. It’s like that big major arc of a TV show like say… Dexter. We know what Dexter does, but the other characters in the show don’t, so we’re essentially waiting on and on to see how they react upon finding out. It still works as long as the storylines are solid, but I’ve got to admit, it’s not as fun as being surprised by news at the same time a character is and basically finding yourself in their shoes and seeing how you would react. Maybe a more relatable example would be AJ/Kaitlyn and the secret admirer. If we knew all along it was AJ, would the waiting game have been as exciting?

To be honest, I think the one thing I would’ve done differently with Taeler and Heidi’s storyline is to not let the audience know how Taeler really feels just yet, because it’d have left some of the freshness there seeing them really interact with each other and Taeler seeming hesitant. We would’ve continued to wonder just where Taeler’s true feelings were as opposed to knowing and waiting for Heidi to find out. I’m still beyond excited to see what happens when Heidi discovers it, and I have a lot of hope that they’ll get a huge feud between the two so I’m looking forward to seeing where they take it as a whole. Like I said though, I still am enjoying it and I love the continuous week to week build up. My feelings are only because it’s not as different as it was in the start considering those weeks before were more segments we’ve never really seen happen the way they were presenting it, at least on TV to my knowledge. I love the way Taeler and Heidi work off of each other too. Taeler really does come across believable when she’s in segments with Heidi, and I’d buy it if we didn’t know her true intentions already.

The match was shortish. I think with OVW, I have a certain scale when it comes to time. 1 minute = extremely short, 2-3 minutes = shortish, and anything above 4 is good. What works really well for me though, is short matches when they contain Lei’D Tapa. She is a beast out there, and short matches make complete sense as she just dominates her opponents. I have absolutely no problems having a quick match when it involves her because whoever the person is (possibly Epiphany it seems), that really poses a threat to her is going to look a million times better when they are able to hang with her and not be defeated instantly. Tapa is in her element out there and it comes across as so engaging and intriguing to me. She has that sort of aura about her that, yes while she does do a few unique moves, some of her moveset is hair pulls and tossing people around, but her presence makes me not even mind. Last week, I had said that Trina didn’t really grab me during her match which consisted of a lot of basic moves, which I think contributes to the difference I have in liking someone with a lot of character as opposed to more of a strict wrestler. There’s absolutely nothing wrong with being just a wrestler, it’s just not really what draws me as much as being both a wrestler and a character… err, if that makes sense. (Hopefully it does)

That’s all for this week! Join me again soon for the continuation of Teidi, as well as finding out just when the Lei’D Tapa Tongan Tour of Terror will commence. Also, will Trina make her return after being absent last week? And who’s ass is Saint Epiphany going to have to kick if Eddie Diamond gets any more obsessed with a certain female?

Don’t you love all the (continuous!) storylines?!