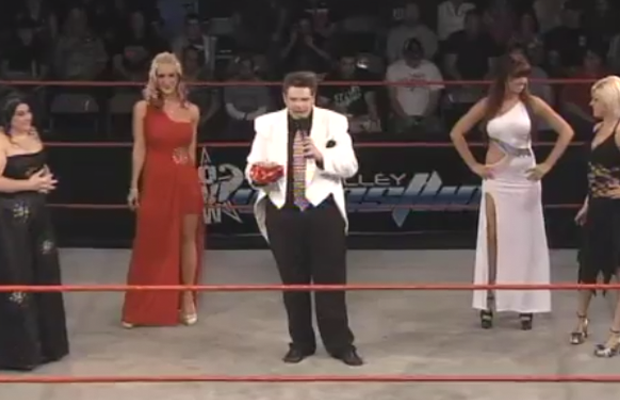 Finally, the moment we’ve all been waiting for has arrived: the end of the Miss OVW contest. Instead of finishing up the contest at Saturday Night Special (thanks to the wrath of Lei’D Tapa), they’ve taken to television to crown the winner.

The tiara, which has somehow been retrieved from Taeler’s clutches, is ready to be awarded. Michael Tutus reminds us that the winner will receive a shot at Tapa’s Women’s Title, which sounds more like a punishment than a reward to me.

Just before Titus can announce the winner, Ray Lynn becomes captivated by his tie. Jessie Belle helps the poor girl back to her designated spot in the ring so Michael can get this show on the road.

Again, Titus is interrupted, this time by Taeler, who is ready to give her acceptance speech. He breaks the news to her that she is not Miss OVW – gasp!

Another interruption comes in the form of the OVW Women’s Champion, Lei’D Tapa, who heads to the ring, takes the microphone and announces that she couldn’t care less about the Miss OVW contest. Samesies!

Anyways, after Tapa relinquishes the mic, Titus finally announces the winner: Lylah! Just before she can be crowned, though, Taeler tries to steal the tiara. A struggle over it ensues, before Lylah finally frees it from Taeler’s clutches. She turns around…right into a big boot from Tapa.

With Lylah laid out, it’s safe to say we won’t be getting an acceptance speech tonight. Tapa leaves, Ray Lynn and Jessie check on Lylah and Taeler steals the tiara, running off like a cartoon villain.

Thoughts: To be honest, I’m just glad the Miss OVW contest is over. It was riddled with pointless segments and inconsistencies. Didn’t they loose like five competitors over the course of the contest?

I’m not really looking forward to another Tapa squash match, because everyone knows Lylah won’t stand a chance. The real story is who will make a run-in during or after the match? Hannah and Holly Blossom? I hope so. Their stint in the spotlight was way too short.