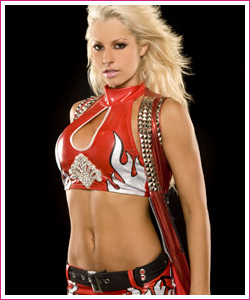 MARYSE
Winning the Divas Championship in the closing moments of 2008, Maryse entered 2009 with her first title reign — and a momentous one at that. Her quick rise from in-ring newcomer to ‘main event’ level talent [as far as Divas go] was unprecedented. 2009 however, has been both a year of success and sorrow for Maryse. Just one night after her big title victory aired, she blew out her knee and spent the early months of 2009 injured.

Returning to the ring in late February, Maryse was back just in time for WrestleMania and continued her feud with Michelle McCool even though they were both now heel. Just weeks before ‘Mania, Maryse then began a short-lived interpromotional feud with Raw’s Women’s Champion, Melina and then the returning Gail Kim.

The Draft of April 2009 saw Maryse and the Divas Title move homes to Raw where she immediately struck a nerve with the brand’s resident top Diva, Mickie James. The long on-off feud was continuously prolonged until finally, the two faced off for the Divas Title at Night of Champions in July. Maryse lost her belt and disappeared off television for several months. Her previous knee injury hadn’t fully healed and the now former Divas Champ opted for surgery.

Returning in rather grandiose fashion the night after Survivor Series, Maryse ‘hatched’ from a Gobbledy Gooker outfit and attacked the current Divas Champion, Melina. Since then, Maryse has begun finding her feet back in the ring and back on Raw, while brewing a feud for the gold she once held.

Despite being absent for some of 2009, Maryse has been kept at the forefront of all things Diva in the time that she has been active. All of her interaction this year has involved the Divas Title, for which she holds the record for the longest reign thus far. Going into 2010, it looks as though Maryse may become the first multi-time Divas Champion.

Check back tomorrow for #6