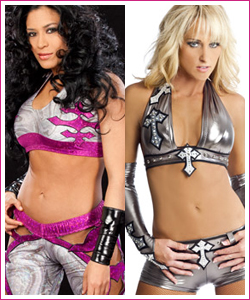 MELINA & MICHELLE MCCOOL
It was too close to pick between our #1 picks in 2009’s Perfect 10. It is befitting that we have a tie for the #1 spot on this year’s Perfect 10 as Melina and Michelle McCool’s year, for the most part, has been synonymous with each other. Their long, arduous feud on SmackDown aided the brand to one of it’s best years of Divas action in some time, while they delivered two noteworthy pay per view matches. The duo end the year as champions, Melina holding the Divas Title and Michelle McCool with the Women’s Title.

For Melina, the year began on the Raw brand in a feud with Beth Phoenix. Melina had been in the middle of a storybook comeback after returning from injury last November. Her story culminated in her earning her third reign as Women’s Champion at January’s Royal Rumble and overcoming The Glamazon, Beth Phoenix.

After defeating Beth in a rematch, Melina entered into a brief feud with SmackDown’s Divas Champion, Maryse in the lead up to WrestleMania. Melina was handed a loss by Maryse.

In April, Melina was moved to SmackDown in the annual Draft where she began her rivalry with our dual #1…

Michelle McCool’s year began with transition, on the final SmackDown of 2008, Michelle had cemented her heel turn by attacking fan favourite Maria after losing the Divas Championship. Michelle’s heel turn saw her attack Maria, Eve Torres and Victoria in successive weeks. In January, Michelle had the honour of competing in Victoria’s final match as she retired from the company. Her feud with Maria continued with the now-Diva of the Year defeating McCool in a grudge match with help from Torres.

After disposing of Maria, Michelle turned her attention to her former rival, the woman who took her Divas Championship — Maryse. The pair battled for the belt on SmackDown in March, being interrupted by a returning Gail Kim.

Post-WrestleMania with Meina now on SmackDown, their paths began to cross leading to a long-term feud. In their first encounter at The Bash, Michelle made history be defeating Melina to become the new Women’s Champion, thus making her the first woman to hold the Divas and Women’s Championships. A month later, the pair faced off again in the fan favourite match at Night of Champions with McCool once again coming out on top.

In the fall, Melina beat Michelle McCool in a non-title match, granting her a shot at Michelle for the title. On the 10th anniversary episode of SmackDown, McCool once again defeated Melina in their third championship bout.

The Diva Trade of October 2009 put an end to the 6 month feud as Melina was traded to Raw. Upon her debut, she won the Divas Championship within minutes defeating Jillian. Melina became the third woman in history to hold both belts and the first to win both in the same year. Melina successfully defended her title against the likes of Jillian and Alicia Fox before pinning her former rival, McCool, one last time at Survivor Series in a traditional elimination match where she and Mickie James were crowned sole survivors.

Meanwhile, the loss of Melina on SmackDown lead to the arrival of Mickie James. McCool instantly found herself in a feud with four-time Women’s Champion. Aligning herself with Layla, McCool began taunting Mickie threatening to make her life a living hell. The duo eventually began taunting Mickie over her weight, referring to her as ‘Piggie James’. Mickie exacted revenge on Michelle by earning a Women’s Championship shot and challenging Michelle to a match at TLC. McCool, however picked up the win and continued her lengthy reign on top.

2009 has been an extremely impressive year for both Melina and Michelle McCool who have managed to stay in the spotlight and in the focus of the main Diva storylines for all of the past 12 months. For Melina, she has spent equal time on both Raw and SmackDown and celebrated two championship reigns. Meanwhile, Michelle continues to rule over SmackDown and her history making title win has led to one of the lengthiest Women’s Championship reigns in some time. Both Divas have shown consistency in the ring despite nagging injuries and have put on some of the best Divas matches of the year on both television and pay per view. 2009 has truly been their year.