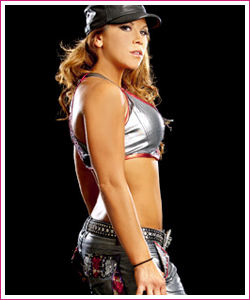 MICKIE JAMES
Mickie James became part of an elite band of Divas in 2009, when she along with two other Divas became the first women to hold both the Divas and Women’s Championships.

The fan favourite began the year on the sidelines as the returning Melina had the spotlight on her. However, Mickie, who had been in a quasi-feud with Layla and William Regal, saw action too, teaming with CM Punk against the aforementioned. Heading into WrestleMania, Mickie defeated Santino in an intergender match.

It was post-WrestleMania that Mickie’s luck picked up however, as the 2009 Draft saw Maryse, the Divas Champion, move to Monday Night Raw. And with Melina traded to SmackDown, Mickie was once again the top babyface of the show. In one of her first outings on Raw, Mickie handed the Divas Champ a loss and put herself directly into title contention.

The feud between the Divas lasted through the spring and early summer months with numerous tag team matches and battle royals. Mickie won a #1 Contenders four-way match and earned a shot at Maryse’s Divas Title at Night of Champions. The feud took a turn just before the event, when in an interview, Maryse came out attacked Mickie with hairspray to the eyes. Mickie exacted her revenge six days later however, when she defeated Maryse for Divas Championship — making her the second woman in history to hold both belts.

After her loss, Maryse disappeared off television while Mickie’s reign as Divas Champ began. Over the next few months, Mickie successfully defended her belt in matches on Raw against Gail Kim and Beth Phoenix. Mickie then faced a brash new Raw upstart — Alicia Fox. Their brief feud led to a Divas Championship match at October’s Hell in a Cell pay per view.

Shockingly just a week later, Mickie lost her Divas Title on Raw in a match against Jillian. Mickie was subsequently traded to SmackDown for the first time in her career after four years on Raw.

As part of SmackDown, Mickie has seen competition against the likes of Layla, Beth Phoenix and Natalya and entered into a feud with the brand’s Women’s Champion, Michelle McCool. The rivalry turned personal as Michelle and Layla taunted Mickie, calling her ‘Piggie James’. At November’s Survivor Series, Mickie led a team of five Divas against Michelle McCool’s team — Mickie, with assistance from Melina, picked up the win. A month later, Mickie challenged Michelle for the Women’s Title at TLC. After a hard fought battle however, she failed to win the belt.

Mickie’s career changing move to SmackDown in October has seen her career somewhat rejuvenated. With lengthier matches and juicy storylines, Mickie has had a jam packed end to 2009. And going forward to 2010, the possibilities seem endless for the 4-time Women’s Champion.

Check back tomorrow for #3