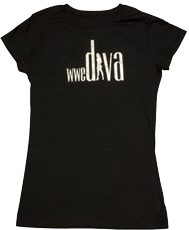 “When we were a little more edgy, we lost a lot of women,” Donna Goldsmith, the WWE’s chief operating officer, told the Post. “They weren’t as comfortable watching with their kids. But now that we are more family-friendly, it’s a perfect reason for them to come back.”

While the article claims that it could be due to ‘lust’ over hot Superstars [which is kinda true], there’s also implications for our Divas. With more women watching, they are able to cater more merchandise to females — including a possible Divas clothing line, which Johnson notes has been in the works for several years and samples were even created of what it could look like.

Erin and I just recently were discussing merchandising for the Divas, or lack thereof. There is a big opportunity to cater to young girls or even older ones with tank tops and such, in a similar fashion to the way Miley Cyrus for example has her own clothing line in one of those American stores. Let’s just hope Maria isn’t ask to design.

By comparison to TNA, who has had an ODB t-shirt and most recently a Kong one too, WWE seems to be dropping the ball. Sure Trish [and maybe a few others] have had their own stuff — even going as far as DVDs, but there’s a brand recognition that could be exploited by using the ‘WWE Divas’ name instead of individual girls.