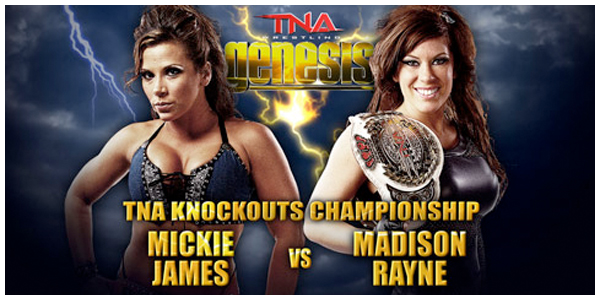 The first pay per view of 2011 features Madison Rayne defending her Knockouts Title against Mickie James. Will the reign of Rayne continue or will the James Gang ride high tonight? The Diva Dirt team weigh in…

April: As I said in this week’s Impact Write-Up, I’m going to have to go with Mickie on this one. I think she’s been with the company long enough to cement herself as a Knockout and Madison’s time has come to an end. This feud between the two has been on since day one, added interference from Tara to side track Mickie but the time has finally come. The Knockouts division needs to be shaken up and a great start is a new champion, a new leader. Mickie has been a multiple champion in her professional career and the Knockouts title around her waist would be icing on the cake.

Cryssi: With the way things go in TNA, I’m not even sure about this title switch being a sure thing anymore. I love Madison as champion and I think TNA does too. That said, Mickie James is the biggest draw for the Knockouts that they’ve ever had. She’s so high profiled and we predicted that she would be a sure bet to be Knockouts Champion in 2011. I just don’t think it’s going to be at this PPV. It wouldn’t shock me to see her overcome the odds and defeat Madison, Tara, and Tara’s elbow, but it won’t be happening tonight. Madison is going to pick up a cheap victory, keep the Knockouts Championship, and lose it in a rematch to Mickie during one of the tapings that happen this week.

Eric: Going into this Sunday, there is a 90% chance that Madison Rayne drops the title to Mickie James. However, this is illogical TNA. I see Madison winning when Tara hits Mickie with the elbow pad. She then will drop it on an ordinary episode of Impact. Disappointed? Me too.

Erin: I’ve been burned a few times in assuming that Mickie will leap straight to the top of the Knockouts division. She spent quite some time battling Tara, and though we knew that it would eventually lead to this, a Knockouts Title shot against Madison, I certainly thought it would have happened sooner. If it had, I’d probably be convinced that Mickie was poised to take the title right away. Now, I’m not so sure. With how they took their time (relatively speaking) with her feud with Tara, I think they might want to do the same with Madison. A lengthy back-and-forth could be established, and for that to happen I think Madison will have to pull off a win, whether with Tara’s help or not–a Mickie win would likely shut this feud down. There’s no doubt in my mind that Mickie will soon hold that belt, but I don’t think it’s going to happen at Genesis.

David: I’ll admit I was skeptical that TNA would be a good fit for Mickie James. I was happy Mickie was offered a contract, but I wanted to see what TNA would do with her before forming an opinion one way or another (like I think we should do with Awesome Kong and the WWE). For the most part I have enjoyed how they’ve booked her and Mickie seems to be enjoying herself down in Orlando. Her feud with Tara featured some memorable moments and now, as she turns her attention to Madison Rayne, I’m excited to see her challenge for the Knockouts Championship. At Genesis she gets her chance to win the title, but I don’t think she’s going to leave the Impact Zone with the belt. There are a lot of moving parts in the Knockouts division right now (Velvet, Sarita, Tara) that I think Mickie may win the match but it won’t be by pinfall or submission. TNA has done a nice job making Mickie fans wait for her to win their championship, and I think after Genesis, she and her fans are going to have to wait a little while longer.

Melanie: This could go either way. TNA is pushing Mickie James as its new female star so I could them wanting to put their belt on her and turn her into a Trish Stratus-esque figure in the division. However, this is also the first encounter between her and Madison Rayne and usually, I wouldn’t call a title switch in the first bout. Personally, my perfect scenario would be Tara knocking out Mickie with her elbow brace, allowing Rayne to steal a victory. So I’m going to say Madison retains, but don’t be surprised if it’s Mickie.

Steven: From the moment Mickie James debuted in TNA, we all knew it would come to this. Mickie vs Madison for the Knockouts Title. To be honest, I don’t see Mickie James picking up the win tonight at Genesis and I can’t say that I want her to. I expect Madison to sneak out the win using some underhanded tactic and Mickie to continue challenging her until she finally picks up the win and the championship. Handled properly this rivalry could have same kind of memorable that the Mickie/Tara feud had. Expect Madison to retain the title tonight at Genesis.