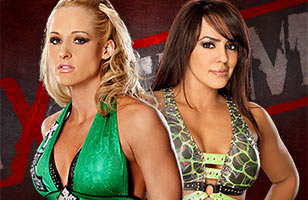 LayCool implode tonight at Extreme Rules in a Loser Leaves WWE Match. Who will be banished? The Diva Dirt team weigh in…

Cryssi: I think the outcome of this match is pretty cut and dry, but just for the hell of it I’m going to pretend I don’t know what the rumors are and I’m going into this blind thinking it’s a Loser Leaves SmackDown match. So… here we go! Michelle and Layla will have a hard hitting, emotionally charged match with Michelle dominating the majority of it. During the half-way point, the entire Divas lockerroom will empty out of the back and walk to the stage, wanting an eye witness view of these two girls destroying each other. After all, who’s life hasn’t LayCool screwed with? After some offense from Layla, Michelle will take a chair knock out Layla, and instead of going for the immediate cover, she’ll turn to where the Divas are standing and start showboating. The crowd will start freaking out because out of nowhere Kharma will appear and slide into the ring behind Michelle. The other Divas will have shocked looks on their faces and when Michelle arrogantly turns around to pick Layla up for the Faith Breaker, Kharma will be waiting. Michelle will scream and Kharma will pick her up, lay her out with an Awesome Bomb, and drape Layla’s lifeless carcass over Michelle. Layla will win the match, Michelle will be done on SmackDown, and Kharma will send a message to all the other Divas by powerbombing Layla on top of Michelle. She’ll turn to the stage, point at the Divas, and start laughing hysterically as the scene will fade into a promo for whatever pay-per-view is next. Yup.

David: What a difference a year makes. Last year’s Extreme Rules was one of the best days ever as Beth Phoenix won the Women’s Championship. Since then? Beth hurt her knee, the Women’s Championship has been retired, and now my favorite tag team LayCool is splitting up. Not good times… bad times. But I guess we knew this was coming at some point. I actually thought WWE should have broken them up long ago, that it would have been a bigger story last year. Now that “Lay” and “Chelle” are going their separate ways I am full of mixed emotions. I am happy to see Layla get her chance to become a bigger star, but I will definitely miss LayCool. I enjoyed everything about them and thank them for a good run. At Extreme Rules this Sunday I hope Michelle does the right thing and puts Layla over. I believe she will (and maybe Kharma debuts and affects the outcome?) The “No-DQ” stipulation is interesting, but one way or another I do see Layla winning. Michelle needs a break from TV and this will give her a chance to refresh her character. Sadly though I’m just not excited to watch these two fight each other.

Eric: This is probably the saddest I have ever been for a WWE match. We have all heard the rumors that Michelle is leaving WWE and when you take everything into account her leaving makes more sense. Like her or not, Michelle has been the cornerstone of the Divas division and has knocked every task she has been handed out of the park. Layla wins the match with a roll up (think Victoria beating Molly in that title vs hair match) and Michelle leaves WWE and WWE loses an even bigger chunk of my heart.

Erin: Well, based on certain rumors, I think it’s likely that Layla will be the one to get the last laugh in this feud. It makes sense that Layla would finally prove herself as someone who didn’t need Michelle or the Lay-Cool name to be somebody by beating Michelle, the “alpha female” of the pair. This could give her a boost into a singles career, being able to defeat a decorated wrestler and boot her out of the company. The only question I have is: after this, will Layla be a babyface or a heel? Will winning this match solidify a turn? I hope not, because I love her as a heel. I think beating Michelle and proving her worth could serve to build up her ego and only make her a more self-obsessed bad girl. If the rumors are true (and I think they are) Layla is winning this..

Melanie: With rumors that Michelle McCool will be leaving WWE, it makes sense that this match would serve as her exit with Layla going over… but then again, that may be too easy. With word already leaking online, I think WWE could pull a swerve here. Perhaps Michelle pinning Layla while her foot is on the rope or with her shoulder up but the referee doesn’t notice. That could lead to Teddy Long setting a rematch, due to the confusion, for SmackDown next week with Layla coming out the winner and Michelle leaving then. Or, due to the confusion, Layla is simply reinstated and Michelle leaves on her own accord. Having said all that, I’m going to go with my gut and say Layla wins BUT I wouldn’t be shocked to see a swerve either.

Steven: Any other time, I would have said that Michelle McCool was a shoe-in to win this match. However, with the recent stories about McCool’s departure from the company, I’m going to with Layla tonight at Extreme Rules. While it’s going to be sad to Michelle go, I think this may be the perfect opportunity for Layla or the newly drafted Alicia Fox to step up and take that #1 heel spot.

Leave your predictions in the comments!