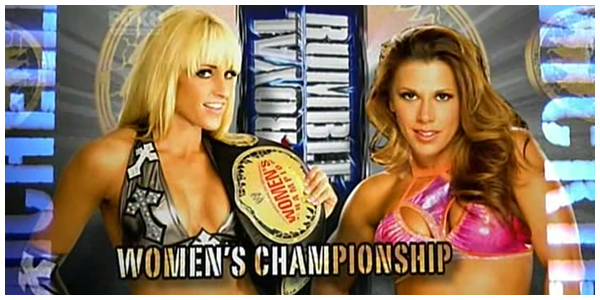 They ended 2009 with an excellent pay per view match and now tonight, Michelle McCool and Mickie James have the dubious task of getting 2010 off on the right foot. Can they do it again? And who will walk away with the Women’s Championship at the Royal Rumble tonight? The Diva Dirt writers weigh in:

Cryssi: There seems to be only one logical outcome for this match and it’s one I don’t really care for. This entire storyline has been all about Michelle McCool and Layla, so it pains me to say that I think Mickie will be winning come Sunday. I don’t want her to be champion again but I find it hard to believe Michelle will retain. I sincerely hope the ‘E swerves us and Beth gets involved, costing Mickie the victory and pummeling Michelle afterward. Wouldn’t it be cool to see the Glamazon just take the Women’s Championship and walk off with it?

Erin: Michelle vs. Mickie – With how badly they have been ragging on Mickie these past weeks (hell, the whole feud RESTS on humiliating her), I can’t help but think there’s an endgame in it for her, specifically winning the Women’s Title. I don’t see why (other than company loyalty) she would agree to participate in such a degrading storyline if there was nothing for her to gain in the end. I also think of this in the old fashioned “who had the last laugh?” theory in predicting the PPV winner. Using this, Mickie hasn’t had the last laugh in… ever? So I suppose that brings her odds of winning to astronomical levels. Her not being o nthe last SmackDown almost had me doubting her odds of winning, but there’s too much weighing in the other direction. I’m going with Mickie, and hoping that with the title switch the fat jokes can magically disappear.

Melanie: I honestly can see this going either way. On the one hand, after all that she’s endured at the hands of Michelle and Lalya [and management], it seems now is the time to put it right by giving Mickie the belt. But on the other hand, Mickie has yet to gain the upperhand in this rivalry or even show any semblance of fighting back — this has been extremely one-sided and it seems the newly found effort into the Divas booking is due to finding new ways to humiliate Mickie. I could see WWE not giving Mickie the pay-off and just having Michelle retain, quite frankly. It’s a tough one to call but I think we’ll see Mickie become the new Women’s Champion tonight, but I wouldn’t be surprised if she doesn’t either. Whatever happens here, I’d like to see Beth Phoenix involved to set up a three-way hopefully at WrestleMania. After the great match at TLC, I really hope Mickie and Michelle can make it two-for-two and with all the emotion surrounding this match, they have plenty to draw from.

Steven: This rivalry between Michelle and Mickie has been going on for quite some time now and has had it’s it’s fair share of twists and turns, including the addition of Beth Phoenix. However, I think we can all agree that Mickie has yet to have the upper hand on McCool and co. For this reason I see Mickie picking up her fifth Women’s Championship tonight at the Royal Rumble. And after all she’s endured these past months, she definitely deserves it.