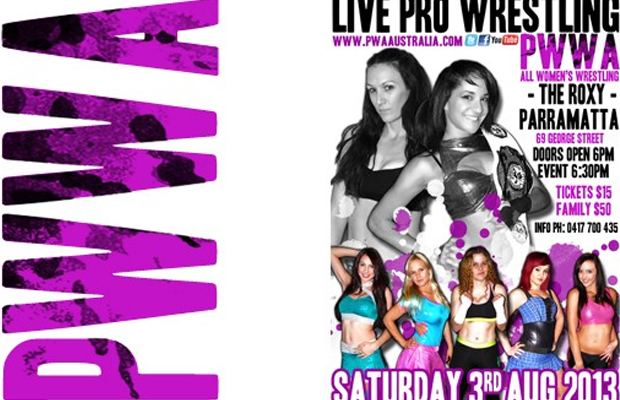 Tonight, PWWA is holding their first show since last year’s event in October, which was headlined by a PWWA Interim Championship match between Evie and Kellie Skater – the third match in their series of singles bouts.

This show will be headlined by Evie, the PWWA Interim Champion, defending her gold against Madison Eagles, the PWWA Champion. The winner of their match will unify both titles.

Results from the show are coming to you thanks to @PWAAustralia on Twitter and NHBGirls.com.

* KC Cassidy vs. Storm is up next. Cassidy wins with a double underhook DDT.

* Shadow Shinobi, a masked newcomer from Victoria, will now take on fellow Victorian, Siren Monroe. Siren takes the victory with a running powerslam.

* Jessie McKay will not be competing on the show due to an injury. The match line-up has changed – Fly Girl and Ashley Sparks vs. “The Worst Blokes” Harley Wonderland and Eliza Sway will now take place instead of their respective singles matches. Fly Girl is the manager of Bee Boy and this is her debut match. Wonderland and Sway pick up the win.

* “The Rate Tank” Kellie Skater will take on rising star Kellyanne English to close out the first half of the show. English, whom shockingly defeated the UK’s “Amazon” Ayesha Ray in a match at the previous PWWA show, manages to do it again by besting Skater in a huge upset!

* In the first match back from the break, WA’s Michelle K Hasluck takes on Arianna Snow, whom is making her PWWA debut. The “new”, crazier Hasluck has dominated the bout so far. Michelle beats Snow to pick up the win.

* It is now time for the main event: Evie vs. Madison Eagles in a title unification match! Four forks and a metal hook were found in the ring gear of Madison. The match is being described as “excellent”. Plenty of stiff kicks and hard hits. Evie wins the match to unify the titles and become the UNDISPUTED PWWA Champion!!