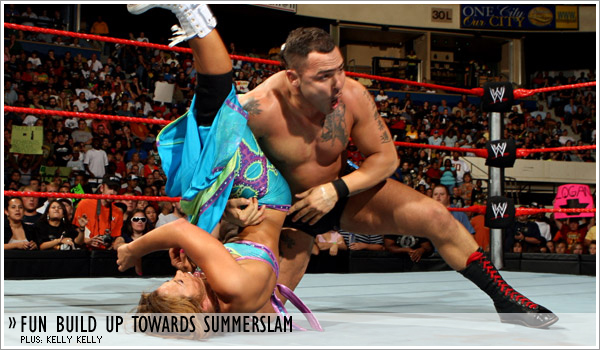 This week on Raw: The build-up towards SummerSlam saw a fun match between Mickie James and Santino. Beth Phoenix once again destroyed Kelly Kelly too.

Thoughts & Reactions
I was really sceptical last week when WWE put the kibosh on ongoing storylines – Mickie vs Katie Lea and Paul Burchill vs Kofi Kingston – and opted to work towards a Winner Take All match at SummerSlam. But judging by this week’s follow-up, the build-up has been fun and really made me excited for this Sunday’s pay per view. It seems, WWE put more effort into the booking this week than they ever did with the Women’s Championship feud between Mickie and Katie. In one night, they manage to have a strong build-up towards a pay per view match and I don’t know about you, but I’m now looking forward to what could be a unique match at SummerSlam.

While the thought of Mickie vs Beth for the umpteenth time does nothing for me, making this a Winner Take All intergender tag match adds some new flare to an otherwise beaten horse. Not to mention, the new comedy double act of Santino and Beth should add some humour into this match at SummerSlam. Will Mickie finally give up the title? A lot of fans are speculating, even the critics, that Beth will take the Intercontinental Championship and make Santino carry the Women’s Championship – as absurd as that sounds, it also adds some importance to the Women’s Championship and the Divas. Two things I’m all for!

Back to the broadcast, Beth and Kelly had a so-so match compared to their encounter a few weeks. I had worried that Kelly would become just another Maria or Ashley on Raw but nope, she’s working on a regular basis and that’s nice to see. Despite some sloppiness in the ring, Kelly is working hard and I have to admire that. Even though she’s jobbing out in most of her matches, just being on screen and being on matches on a regular basis put Kelly a notch up from Maria or Ashley during their tenures on Raw. A few weeks ago, Kelly and Beth shared an intense chemistry in the ring – that was kinda lost this week, but the match was fine though nothing compared to their match last month. I liked the end segment with Santino wanting Beth to hit another move on Kelly.

As for Mickie vs Santino, well when Santino was cutting his promo if you didn’t clock on he was talking about a match with Mickie and not Kofi – make sure you take the slow bus when school starts up again, won’t cha? I would have liked to see Mickie be more aggressive and really wow the crowd the same way Beth did in her return match with Santino last month, there wasn’t that “Oh my god, Mickie’s totally beating up Santino” element that made you both want to cheer for her and laugh at the same time. Santino going over was the right thing to do, giving the challengers the momentum going into SummerSlam. The danger now is though, the champions will pick up the win at the pay per view. I think it’s a wise move to put the titles on Beth and Santino. All around, it was a passable Raw that did it’s job – pushing Sunday’s match.

No Layla or Katie Lea this week… hmm.

Kelly Kelly: Kelly seemed sloppier than before, but fine for what it was.