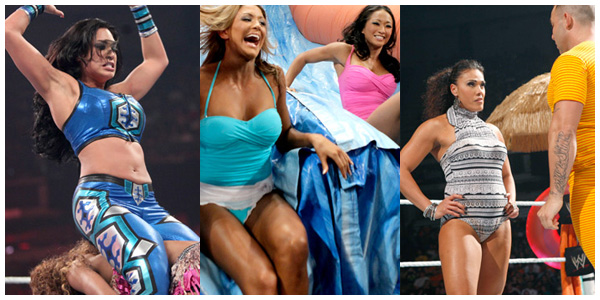 After an exceptional 6 Diva tag match and a huge return by Melina last week, Diva fans were waiting with bated breath to see what was in store between the returning Melina and Divas champion Alicia Fox. WWE decided to give us a treat this week in the form of Melina vs Alicia in a non-title bout. Unfortunately for us, the action didn’t quite live up to the hype. Check it out below:

First out is Melina, who is looking great, followed by Alicia Fox, who is looking rather… interesting. The two alpha females stare each other down before the referee starts the match. Melina goes for a lockup, but Alicia scoops her up and powers her into the corner. After a fierce elbow, Alicia flings Melina across the ring by her hair. While Melina is getting her wits about her, Alicia kicks her in the gut, forcing her to retreat to the apron. Alicia tries to follow up, but Melina lands a shoulder block and slides between the champ’s legs, pulling Alicia down over her knees for a unique backbreaker and a near fall.

Before Alicia can get back to a vertical base, Melina starts wailing on Alicia with strikes to the back. Alicia tries to get back into the mix with a clothesline, but Melina dodges with a matrix move, followed by a snapmere driver and a flying faceplant. Alicia retreats to the outside to regain her composure, but doesn’t get the chance, as Melina is hot on her tail. Melina charges around the ring to bring Alicia in the hard way, but is laid out by a vicious clothesline.

Melina manages to crawl back into the ring and Alicia drags her to the middle of the ring by her hair for a two count. Still holding a handful of hair, Alicia slams Melina to the mat and lays in a elbow. Alicia whips across and attempts her patented tilt-a-whirl backbreaker, but it goes awry. However, this doesn’t stop Alicia from going for the pin for a two count. Alicia pulls Melina to her feet again (by her hair of course) and tries to slam her to the mat once again, but there was some miscommunication between the two and Melina ends up just falling to the mat face first.

Alicia immediately takes it to Melina, driving her knee into her back while wrenching back on her head. Melina fights out, but Alicia locks in yet another submission, this time an impressive Torture Rack. Melina manages to wiggle out once again, and reverses into a scary looking Last Call for the win. During the commercial break, the mysterious GM announces that Melina has earned herself a shot at the Divas Championship this Sunday at Summerslam.

On paper, Melina vs Alicia sounds like a great match, but it failed in it’s execution for several reasons. First of all, Melina has to be at least a little rusty coming in off of 8 months of inactivity. To push her into a singles match with the champion was a big mistake, especially a longer than average match like this one. I would have preferred Melina participate in a few tag teams matches, picking up wins against Alicia that way instead. I just feel like this whole situation is rushed and no one will benefit from it at the end of the day.

Secondly, WWE has allowed Melina to jump to the head of the line with little to no buildup. I truly believe this feud would benefit from having a few weeks to flourish. It seems WWE is just desperate to get Melina vs Alicia on to the PPV, which is a huge mistake. I’d much rather see the Raw Divas forego SummerSlam altogether and save this title match for Night of Champion. This way, the feud is given time to develop and Melina and Alicia get some to get used to each other in the ring. Needless to say, I’m not really looking forward to the title match at Summerslam after seeing this match.

Aside from the Diva Title feud, WWE also booked the obligatory pre-SummerSlam bathing suit match, this year dubbed as a ‘Summer Swimsuit Spectacular’. While most of us cringed when we saw the graphic for this match pop up, the match wasn’t the train wreck we were expecting. Check it out below:

We come off commercial to Jillian and Maryse already in the ring with… Santino and Koslov?!?! Great… Although Cryssi said she thought Maryse looked great last night, I’m not quite sold on her shades and Kung Lao hat combo just yet. Next out are the team of Eve Torres and Gail Kim, who make their entrance via inflatable slide (they sure got that set up quickly), which looks like a lot of fun to be honest. The Bellas Twins slide in next and our match is underway.

Bitter rivals Maryse and Eve kick things in a rather comical way, as Maryse tries to smother Eve with her hat. Eve tosses it away and goes on the attack with a Thesz press. The ladies catfight for a bit, much to the chagrin of Santino, who appears to be officiating this match, before Brie Bella tags herself in (despite standing in the middle of the apron). Bella #1 manages to get in some licks before Maryse slaps the taste out of her mouth and whips her into the corner. Maryse charge, but Brie counter with an elbow. However, Before Brie can follow up, Maryse’s partner Jillian restrains her with a beach towel, allowing Maryse to get back in control.

Jillian tags in and launches Bries across the ring with a hair beel before locking a surfboard-like submission. Brie fights her way back to her feet and hits a few booty bumps before flinging Jillian over her head. Brie crawls across the ring and tags in Nikki, who hits a flurry of strikes, followed by a slick hurricanrana and a low dropkick.

Nikki goes for the pin, but it’s broken up by Eve, who lays Nikki out with a corkscrew neckbreaker. Maryse rushes in next and sets up the French Kiss, but is ensnared by Gail with a neon pink innertube. While Maryse struggles to get free, Gail hits Eat Defeat, but is attacked by Jillian before she has the chance to celebrate. Jillian hoists Gail onto her shoulders and kicks Eve to the outside, before throwing Gail on top of her. Unfortunately for Jillian, she didn’t see Nikki Bella (who is still the legal competitor) scaling the turnbuckles. Nikki hits a flying crossbody to pull out the win over Jillian yet again.

The Bella don’t get to celebrate for long, because it seems Tamina (looking great, might I add) has made her way to the ring (via slide, I assume), and the twins retreat. Tamina stares down Santino, blocking his escape in a very strange and slightly uncomfortable exchange. Eventually, Tamina lets the Milan Miracle leave but not without a firm slap on the ass, sending Santino up the ramp giggling like a school girl.

While this wasn’t the best match Raw has ever put on, it was surprisingly good, especially for a ‘Summer Spectacular’. I thought the Divas managed to find a good balance between comedy and actual wrestling, which is new for these types of match which are usually all fluff and no substance. Also, good to see that Santino/Koslov didn’t really play a part in the match. In fact, I forgot Kozlov was even there.

The Tamina/Santino exchange was interesting, but I cant help but feel like it’s a rehash of Beth/Santino, which I wasn’t a huge fan of. On the upside, it’ll give her something to do since it looks like The Hart Dynasty/Usos feud is on hold for now.

All in all, it was a hit and miss night for Raw Divas. While Alicia and Melina failed to impress, the ‘Summer Spectacular’ exceeded expectations. I’m hoping that the less than impressive match between Alicia and Melina was a one time occurrence and that they are able to redeem themselves this Sunday at Summerslam.