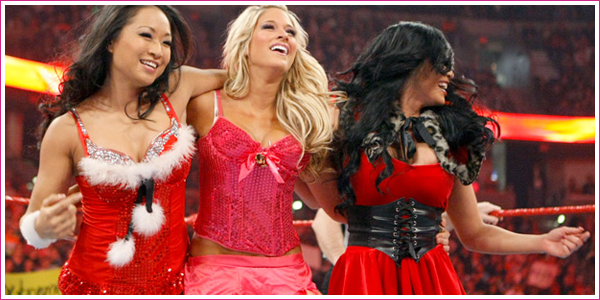 As we all have become accustomed, this is the time of the year where folks sing carols, wrap presents, and the Divas amount to nothing more than skimpy red costumes. So we saw this coming, and it shouldn’t be surprise that this week’s Raw was absolutely pointless. In what has become an annual thing, Melina, Kelly Kelly (wearing pink–shocker!) and Gail Kim took on Maryse, Alicia Fox, and Jillian in a Santa’s Little Helpers match:

Mercifully, this match took place at the very beginning of the show and was barely short enough for a piss break. Gail and Jillian started things off, with Jillian getting early control. Gail turns the tables, ending with a cross body from the top rope. She goes for the pin, but Jillian kicks out. Jillian whips her into the corner, attempting her handspring elbow move, but is caught by Gail in a leg lock. Gail stays propped on Jillian’s shoulders while she walks towards the center of the ring, dropping onto her back and sending the back of Gail’s head slamming onto the mat. She goes for the pin, but Gail kicks out.

Jillian tags in Maryse, and the both of them whip Gail into the corner (who does some wicked selling, practically throwing herself into the turnbuckle). Maryse hits Gail with a back breaker and gets a 2-count. She goes to throw Gail into the corner but Gail reverses, tagging in Kelly. Kelly goes on a flurry of offense, hitting her programmed moves (clothesline, dropkick, frankensteiner). She then hits her K2 move, but Alicia and Jillian run in to break up the subsequent pin attempt. Thus, the whole match (or what vaguely resembled a match) unravels, with Melina and Gail taking out the heels. Maryse picks up Kelly, but Melina drop kicks her, allowing Kelly to land on top and get the pin. I don’t see how a weak splash is enough to pin her, but I won’t object to pulling the plug on this as fast as possible. Kelly gets the pin and the win for her team.

The babyfaces celebrate as the heels grimace, and that’s it for the Divas action tonight, if you don’t count Eve slowly but surely building up a remarkably predictable and uninteresting storyline with Chris Masters while sitting politely at ringside (and for the record, I don’t). I’m aware that this silliness happens every year, but I’d prefer it to take place at Tribute to the Troops (where the Divas are always dressed skimpily ad never really wrestle) rather than taking up valuable storyline time on Raw. But hey, it’s the week before Christmas, and I’m sure no one’s tuning in for some great story development. Hell, they had a skit with DX and Hornswoggle in a makeshift courtroom for Christ sake–it’s clear that the writers phoned it in.

I think, though, that it’s just another disappointment piled on an already growing mountain of disappointments. From last week’s head-scratcher to the weeks upon weeks of short matches and inconsistent stories, it’s been a long time since we as fans have felt satisfied with the WWE’s use of Divas on Raw. It’s a perfect metaphor for the way things are going when a 6-pack of Divas are packed into the ring to wrestle in ridiculous “sexy” outfits and still can barely get past the 2-minute mark. It was a throwaway segment on a throwaway show, but it still falls in line with what the Divas’ mission has been for a while now: look pretty, but don’t take up more than a few minutes of screen time–we need that for DX!