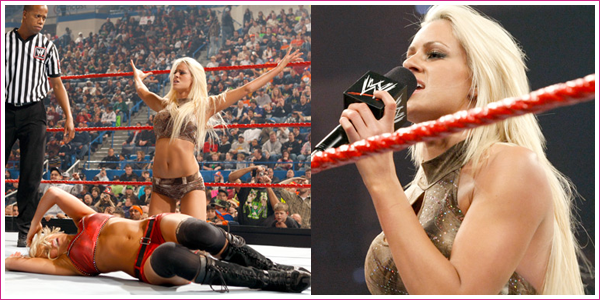 It seems as though last week’s Santa’s Little Helpers match actually had some bearing on the future, as apparently Kelly Kelly‘s pin on Maryse has led to a match between the two this week. Will it be better than last week’s short skirt convention? There’s only one way to find out:

Maryse starts the match, as she has most of her matches, by taunting Kelly. Kelly responds (as most of Maryse’s opponents have) by tossing her around, taking advantage of the match. Maryse eventually turns the tables, latching herself and Kelly in a hair-pulling trap. She breaks it with the punch to the head, and proceeds to taunt Kelly, leading to another flurry of offense by Kelly. She clotheslines, dropkicks, and caps it off with a cross body into a pin attempt. Maryse kicks out at two and takes refuge in the corner. Kelly attem
pts her handspring elbow, but Maryse moves. Kelly kicks Maryse and attempts to hit another top-rope attack, but Maryse grabs her by one arm, yanking her off the top rope in a mega arm drag. She then hits her DDT and it’s all over.

Post-match Maryse taunts the crowd before cackling on the mic, alternating between English and French to essentially tell Melina that she will never be as sexy as her (How’s that for a threat? I’m sure it sent chills down Melina’s spine.) and that she will be the next Divas Champion. It would be the most textbook, bland promo ever if it weren’t for Maryse switching into French a few times. Still, it didn’t do much to develop her character beyond “I’m sexy and you’re not!”–I doubt there’s much else we’ll ever see from her character, at least as a heel. Hopefully if Melina has a rebuttal, it’ll carry the feud beyond its current one-dimensionality. I doubt it will, though. I mean, what can you say in response? “I’m rubber, you’re glue”? Yikes.. In that case, Raw might be rivaling SmackDown in the “Divas ask like 4th graders” department. I doubt it’ll degrade to that, but it’s certainly possible, given the obvious lack of thought the Raw writers have put into the various Divas Championship feuds over the past few months. I hope they focus on the aggression and frustration felt by Melina, prompted by the taunts and cackles of Maryse. It’s basic, but if played right, it could still be a pretty entertaining game of cat-and-mouse.

The match between Kelly and Maryse was simple but decent–Maryse actually got some offense in before the end! It was one of the more effective singles matches in a while, with Kelly proving to be good fodder for Maryse’s dominance–she’s a beloved babyface that the fans react to, and her reputation won’t be ruined by a relatively easy defeat by Maryse. It definitely shows that Kelly has a role in the company–rag doll for the heels. It’s not necessarily a coveted role, but one that Kelly fits perfectly.

Beyond that short match (but then again, most Diva matches these days are measured with a shorter stick), this week’s Raw was unremarkable. A lot of Divas got screen time with Timbaland (welcome to the stable, Gail!), but other than that, Divas action was limited. Here’s hoping the action this week on Superstars will zap some much needed life into Raw’s stable of Divas.