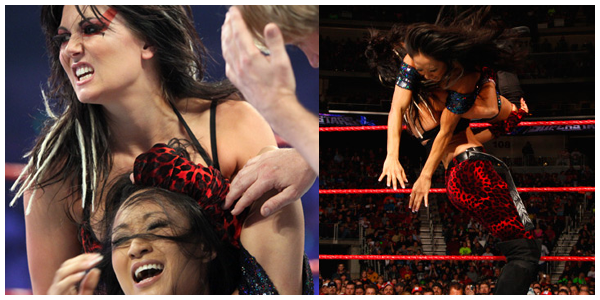 Any sort of buildup to this Sunday’s Divas Championship match was noticeably absent from Monday’s Raw, but never fear! The WWE hasn’t completely forgotten about this match, for this week on WWE Superstars, Gail Kim tries to build some momentum going into the big match in taking on Katie Lea. Watch the match below:

Katie Lea takes control out of the tie-up, twisting Gail’s arm behind her back. Gail gets out of the hold by hitting a snapmare, then rolls Katie into a crucifix pin. Katie kicks out, and Gail takes her down again with an arm drag, holding onto the arm and twisting it behind her head. Katie gets free by catching Gail in a leg scissors, but Gail slips free pretty quickly, rolling Katie into a pin for a 2-count.

Katie reverses an irish whip, sending Gail into the corner. Katie charges but misses her mark when Gail slips out through the ropes. She then sends a shoulder into Katie’s midsection, flipping over her back-to-back and attempting a roll-up. Katie hangs onto the ropes, though, and Gail goes flying without her. Running in for the attack, Gail is redirected shoulder-first into the ring post. She hangs there for a while and Katie has to drag her out from between the ropes to roll her into a pin. Gail kicks out at 2.

Katie lays a few boots into Gail before latching her into an arm submission identical to the one Gail hooked her in at the beginning of the match, right down to the same arm. I like that–it tells a bit of a story. Still, we might end up with two competitors with bum left arms by the end of the match. Yikes. Michael Cole says that Katie Lea is working on Gail’s right shoulder, the shoulder that hit the ring post, but it’s actually the opposite. Oh well. Might as well take out both arms, I suppose.

Gail jabs Katie a few times to get free, but Katie stops this with a knee to the stomach. Katie lifts Gail up and hits a vicious shoulder-breaker (to the left arm, if you’re keeping score at home). Katie has shown a tendency to use power moves we don’t see Divas bust out too often, and ones like these are impressive while continuing the forward-momentum of the story and further punishing Gail’s shoulder. She’s not one to use flashy moves that don’t do much other than dazzle the audience, as other Divas tend to do–her interesting moves have substance.

Anyway, Katie goes for the pin and gets a 2-count. She pounds on Gail a bit before ramming her shoulder-first into the turnbuckle. I like how she set that up, with holding her left arm back to leave her shoulder prone. As Gail holds her shoulder Katie Lea forces her into a pin, but she kicks out. She hooks Gail back into the shoulder submission from before. Gail gets to her feet rather quickly, but Katie Lea slams her back-first onto the mat before she can try anything. They trade blows a bit before Katie lifts Gail up onto her shoulder. Gail slips free, going on a string of offense and hitting a cat-like cross-body from the corner. She hooks Katie into a pin, but gets a 2-count. Katie crawls to the corner and Gail hits her slip-out attack, climbing the turnbuckle and hitting a flying dropkick. She attempts a pin, but Katie kicks out.

When they both get to their feet Gail goes for the Eat Defeat, but Katie blocks it, hitting a flying kick. She continues her offense streak, whipping Gail into the corner and charging. Gail lifts up her legs, dodging the attack and giving her the opportunity to hit the Eat Defeat. She pins Katie Lea for the win. As Gail celebrates, Maryse come out to the stage, simply applauding Gail’s effort. Gail just looks confused.

The match, while short, was pretty entertaining. Katie Lea and Gail work quite well together, with Katie’s power moveset and Gail’s aerial abilities allowing them to play off each other in a compelling way. I’d love to see them work together more, and allow Katie Lea to demonstrate some more of that tenacious heel streak she has on Gail’s able selling, but I doubt we’d ever see a feud between them. A match now and then would be nice, though.

But about this match’s spectator–Maryse’s “fool Gail” tactic would work a lot better if she looked a bit more sincere in what she was doing. We all know she’s not really applauding Gail or really wishes for to have 5-star match with her, but it’s not believable for Gail to be so perplexed by her actions. I guess it amounts to a half-assed attempt at creating conflict between them. Speaking of half-assed, what kind of PPV buildup was this? A partial stare-down from the top ramp on a show nobody watches? Sure, the WWE has never had any sort of motivation for building this feud or tournament, but it’s just ridiculous how obvious they are at phoning it in. Let’s hope the booking for this Sunday’s match won’t be nearly as lazy.

Food for thought: Could Maryse ever pull off a babyface run?