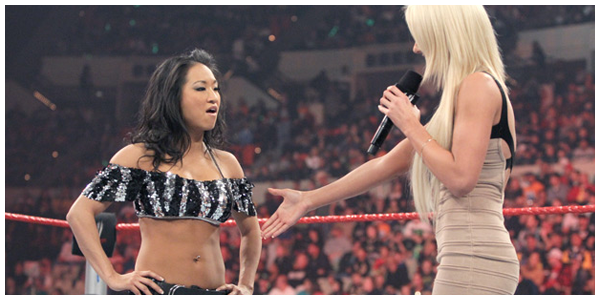 For weeks we’ve been following the Divas Championship tournament, with all its stops and starts. Two weeks ago we finally made the match-up for the finals, but getting to that match has been harder than it seems. Many of us want the WWE to just get it over with, as it’s been obvious from the start that Maryse will be walking away with the title. Thus, it’s been some acute form of torture to see the WWE stretch this thing out as long as possible. This week was no different, and on top of it we got some bad good news: the finals will be taking place in less than two weeks at the Elimination Chamber PPV. Until then, we’ve got two Raws to fill, and you better believe it that the WWE will give it as little build up as possible:

See? We’ve been treated to a random match between Gail Kim and Jillian, which kind of sneaks up on us because no one was given an entrance, and the match wasn’t even announced. Hey, they’ve gotta free up time for all the Shawn Michaels angst and John Cena beatdown replays! Maryse, of course, is on commentary, making this impending finals match-up even more of a laughing stock. You’d think the WWE would get that doing it this way makes it look like Maryse is the champion, scouting her challenger in Gail. I’m sure they notice, but just don’t give a shit.

In the ring, Gail and Jillian start with a tie-up, Jillian taking control and backing Gail up against the ropes. Gail slips through the ropes, falling to the outside. Jillian tosses her back into the ring and goes for a pin, getting a 1-count. She whips Gail into the corner and gets an elbow to the face when she goes for an attack. Gail climbs to the top of the turnbuckle, but Jillian sweeps her feet and knocks her all the way to the mat. Another pin, another 1-count.

Meanwhile, on commentary, Maryse talks about how much more sophisticated Raw Divas are in contrast to what’s been going on on SmackDown with Mickie James. Complain about the fat jokes all you want, Maryse, but at least they’re given more than 3 minutes of screen time. Maybe the Raw Divas should start having food fights.. Jillian pounds Gail’s head onto the mat and hoists her up, but Gail slips free, hitting the Eat Defeat. She pins Jillian for the win.

The match, which was literally ONE MINUTE long, was as good as any match could be with such a ridiculous time limit. I give boatloads of credit to Jillian and Gail for making such a joke of a match interesting and fun with what little they were given. Funny, though, that the post-match promo was longer than the match itself. Maryse, get priority? Never!!

In this promo, Maryse tells Gail that she’s looking forward to their match in 2 weeks and hopes that it is great. She then speaks in French, saying, “Gail, I just wanna say that you smell garbage at a 100-feet around.. Seriously, you stink! You look like a poor little girl, I have pity for you. You’re miserable.” (thanks to Zackitty on Twitter for the translation). Gail can’t understand this, but she reluctantly shakes Maryse’s hand afterwards. Maryse wishes her luck in the match, and departs.

The whole booking for this tournament has been so inconsistent and half-assed that I’m really not surprised that this point. It’s as if the WWE isn’t even trying to hide that Maryse is the one they’re pushing to the title. If they don’t give two shits about this tournament, why are they even putting the finals on a PPV? Why not get it over with a quick match on Raw if it’s that much of a hassle to book for? I suppose stretching it out this far lends them time with which they can avoid actually booking a feud. Meanwhile, we get even shorter matches than we’ve become accustomed to (I mean really, 1 minutes??) and Maryse gets to insult Gail on the sly. I wonder what language-hidden insult Maryse will come up with next week?

This just proves how low of a priority the Raw Divas are. Even with something that is supposed to be exciting and different–a championship tournament–it’s given embarrassingly little screen time and seems to be tossed together in the minutes prior to the show. I suppose the Gail/Jillian match was only fortunate enough to make it on the show because they found some extra time in between the multiple Triple H/Shawn Michaels bitchfest segments and replays of Batista’s beatdown on John Cena. Its this kind of lack of effort that makes it tough for Diva fans to even care about what happens on the show. I know that I find it laughable that I’m putting any effort into writing this Redux when it’s clear that the WWE is treating this storyline as an afterthought, something they can throw on TV if there’s extra time. It’s fitting, though, that on Diva Dirt Raw has become an afterthought of sorts to the exploits of the SmackDown Divas. I don’t even think the two brands are competing for our attention anymore, because if so, it’s one hell of a one-sided fight.

Food for thought: Do you think the Maryse/Gail match at the Elimination Chamber PPV will be given decent ring time?