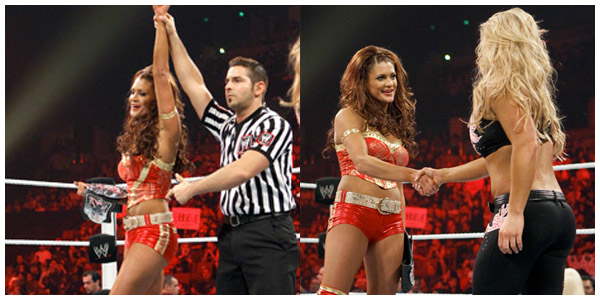 After picking up a win over Melina and The Bella Twins on last week’s edition of Raw, Divas Champion Eve had a full head of steam going into her title match on this week’s edition. However, the #1 contender Natalya was looking to settle her tea kettle and relieve her of the belt. That said, the champion and challenger probably didn’t expect the match to be a lumberjill match. How will Natalya and Eve fare with the rest of the roster standing guard outside of the ring? Check out the match below:

We come from commercial to find Natalya in the ring awaiting her opponent, while the lumberjills lined the ring in their Sunday best. Eve makes her way to the ring next to a decent reaction from the crowd. In the spirit of friendly competition, both Divas shake hand and our championship match is underway.

Eve and Nattie start off with an impressive display of chain wrestling, followed by a double dropkick, leaving both Divas at stalemate of sorts. They lock up again, but this time Natalya gets the upper hand and takes Eve down to the mat and goes for several quick pins. Nattie tries to follow up with a waistlock, but Eve reverses into an impressive armdrag into a key lock. Natalya tries to fight out of the hold, but Eve whips her toward the turnbuckle. Nattie manages to stop short and takes the challenger off her feet, giving her an opportunity to lock in a surfboard submission. In a very unique spot, Eve frees her hands and rolls free of the submission, before rolling back through to pin Natalya’s shoulders to the mat. Very entertaining spot from Eve.

Natalya kicks out at two and slaps on a side headlock, slowing down the pace of the match. After a few shots to the midsection, Eve escapes and whips Nattie into the ropes. The two Divas avoid each other with some quick evasion, but Eve gets the best of the exchange with a stiff back elbow followed by a senton for a two count. Eve tries to keep the heat on with a clothesline, but Nattie dodges and counters with her patented discus clothesline, sending both Divas down to the mat.

Natalya makes it to her feet first and grabs Eve, but the champ turns the tables and tosses Natalya to the outside. The Lumberjills waste little time going after Natalya. In a matter of mere seconds, shoes have been kicked off and hair is being pulled. Gail Kim and Tamina come to Nattie’s rescue, fending off the heels, to turn a phrase and pulling her to safety. In the meantime, Eve comes flying out of the ring like a superhero, taking out the heel Divas… except for Melina, who got the hell out of dodge (Has she been taking lessons from Mr. Glamazon?).

While Melina tries to help her fallen comrades (You O.K, gurl?!), Eve climbs back into the ring to deal with a beaten up Natalya. Eve throws Nattie to the turnbuckle, but the challenger stops short and turns around, only to knock heads with Eve sending them to the mat once again. Nattie makes it to her feet first and goes for a magistral cradle, but Eve reverses it and picks up the win in an anticlimactic ending.

Aside from the sketchy ending, I really enjoyed this week’s Divas match. As I’ve said before, I wasn’t too sold on Eve holding the belt again, but she proved tonight that she can put on a good match if given the opportunity. I enjoyed the chain wrestling between the two, as well as the ridiculous surfboard counter. As much as I love Nattie, I really feel that Eve was the MVP here. Hopefully, she can keep up the good work and some of the nay-sayers will start to see her as a credible champion.

As for the surprise lumberjill stipulation, I actually enjoyed it. Granted, it didn’t really add anything to the match, but it did give us some funny, such as Melina threatening Gail and Tamina with her shoe. The lumberjill factor also helped lead into the backstage Divas segment:

Post-match, Eve is backstage getting punked out by the Bella Twins… Wow, never thought I’d type
THAT sentence. Anyway, things get ugly quick when one of the Bellas tries to choke Eve and a catfight breaks out. Before the twins can do too much damage, Gail and Nattie come to the rescue. Some more fighting ensues before referees arrive to pull apart the clashing Divas.

Like I’ve said before, I LOVE the new Bella Twins. It seems like they were destined to be heel, as it just seems so natural on screen, not to mention we get to see a lot more character from then. The one question that this segment left me with was: “Where is this going?” Will we see Eve, Nattie and Gail feud with The Bellas? Furthermore, will The Bellas bring in someone to even out the numbers? In any case, excellent showing from the Divas tonight. I hope to see all our questions and more answered on next week’s installment.