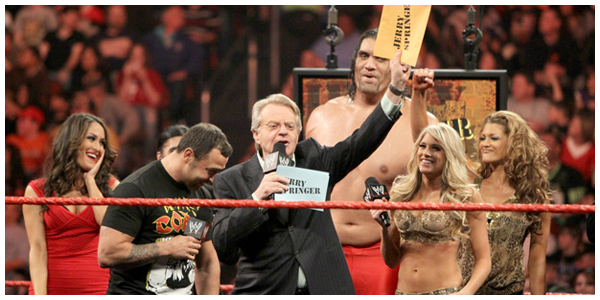 If last week’s Raw was lacking in terms of build-up to the Divas Championship Tournament finals, this week was downright moronic. With Maryse and Gail Kim‘s long-delayed match still set for this Sunday’s Elimination Chamber PPV, one would be safe to assume that there would be at least some build up for it on the last Raw before the show. Just a little? Maybe even merely acknowledging it? Well, keep your hopes at ground level, kids, because the WWE disappointment machine was on full power this week:

Guest GM Jerry Springer comes to the ring for a special show entitled “WWE Superstars’ Most Intimate Relationship Secrets Revealed”. If you’ve ever seen Springer’s show, you know that it only features the trashiest of the trashy (think topless midget fights), so this was never destined to be flattering for any individual involved. Springer introduces Kelly Kelly, whose secret is that she’s pregnant! Yep, she must be early along, because we all know nothing says pregnant like washboard abs and a belly-baring top. She tells Jerry that she doesn’t know who the father is, in a move more akin to Maury Povich’s show than Springer. But whatever, just go with it. All you need to know is that Kelly is the village bicycle.

She brings out the first possible father, Santino. He calls Jerry Maury and details the situation that he thinks got Kelly knocked up. Kelly then tells him that she needed someone else to “finish the job”. It’s at this moment that I wonder what happened to the WWE’s PG aspirations. I guess they go out the window when someone like Springer’s on the show. Still, I’d be pissed if I were a parent who brought my kid to the show.

She says she needed someone with more experience, and this prompts Michael Cole and Jerry Lawler to be brought into the mix. A few dry heaves later, Brie and Nikki Bella come out with a revelation of their own. They say they saw someone else with Kelly, and Nikki breaks in to announce that Brie is a man. They catfight, Springer style. After the fight is broken up, the next possible baby daddy is brought out, and Chris Masters enters. In response to this, Eve Torres comes busting in with her best impression of a Springer guest, trash talking Kelly for “stealing her man” and fighting with her. She then reveals to Chris that she had cheated on him with the Great Khali, who comes to the ring and embraces her. The craziness simmers down, and Jerry reads the results of the paternity test, revealing the father of Kelly’s 3-day old fetus. Science has come a long way, eh?

He announces that the father is Hornswoggle, in a predictable WWE punchline. He runs around the ring a bit before Jerry has had enough and leaves, saying that these shenanigans are too much for even him. Lawler tells him that it was all a joke, and that they have a secret of Springer’s to reveal. They reveal that Springer has had a secret relationship with… Mae Young! Yep, if there isn’t a punchline more predictable than using Hornswoggle, it’s using Mae Young. She kisses on him and the segment ends.

Now, I would be just fine with this bit of silliness (because that’s all it is–a gag to fit with the week’s GM) if we also had some actual Diva action on the show to balance it out. Sadly, even though the match is in a few days, the WWE didn’t even take a moment to acknowledge the match on the show. Instead, we get a bit of build-up on Superstars, the show that nobody watches. Gotta love the calculated booking for this feud, eh?

If it wasn’t obvious by now, the Divas on Raw are a ridiculously low priority to the bookers. From last week’s joke of a match to this week’s complete ignoring of the impending “big” title bout, it’s obvious that they never had a real plan for this “tournament”. Melina‘s injury caught them off guard, and they’ve been reeling ever since, with week upon week of subpar matches and half-assed booking. I just hope they remember to put the match on the PPV. Hey, they might need extra time for the pre-match promos for both Elimination Chamber matches, after all! I really just want this “tournament” to be over so we can have some semblance of a plan or feud for the Divas. Right now, it’s just been a strategy of “throw shit against the wall and see what sticks”, and nothing’s even sticking. The booking for the Divas hasn’t sucked this bad in a long, long time, and it’s tough to even care about it at this point. Hopefully, maybe after Sunday’s match we can raise the bar on the Care-o-Meter from “don’t give a shit” to “minimal interest”. Dream big, people!

Food for thought: Would you like to see the WWE return to a more risqué style, as seen on Raw, or should they stick to the PG label?