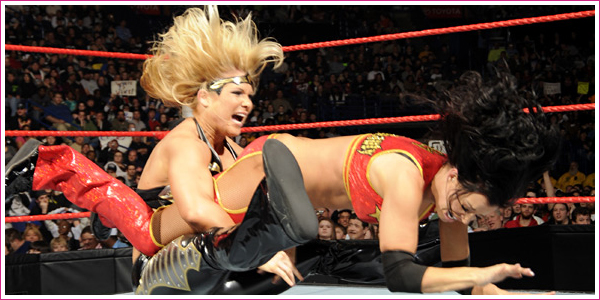 Raw Recap
After losing the Women’s Championship just over a week ago, Beth Phoenix had something to prove when she faced off against former nemesis Candice. Also on hand to ‘take out the trash’ was Rosa Mendes. And could a new feud be blossoming between Mickie James and Layla? Layla teamed with her man, William Regal in a tag match against Mickie and CM Punk.

Erin:
Seeing two Diva matches on Raw always makes me happy – it shows that the WWE is actually investing in them. However, these matches didn’t seem to advance any storylines. Even so, they were pretty entertaining to watch.

Mickie & CM Punk vs. Layla & William Regal was decent.. For some reason, Mickie and Punk make a good duo, though I pray to God they don’t try to pin her with him legitimately – poor Mickie’s had so many failed “relationships” on screen it makes her look a tad ridiculous. She did well in this match, balancing out Layla’s frenzy (it looked like she really knocked Mickie out in the beginning!) and playing the typical babyface role. Layla seemed a bit too spastic.. It’s good she’s a heel, because she can chalk it up to evil-ness, but she still needs to tone it down a bit. I’d like to see Layla and Mickie have their own little feud – it’d be nice to give Layla something to do rather than be dragged around by Regal, and I’d hate to see Mickie rot on the sidelines.

Beth vs. Candice was odd, because I was sure that Melina would bust in at any moment. She didn’t, and we had a relatively normal match, with Candice pretty much doing the job. What makes that more obvious than having Rosa drag and toss her out of the ring, like she’s something to be discarded? Don’t get me wrong – I don’t like it. I’d much prefer that she turn heel as the rumors have been saying. That way, she can turn her recent shortcomings into a reason to go all “bad girl” on us. And as an added plus, we probably would be spared her terrible ring entrance. That’s definitely worth mulling over. I’ve always hated it – and seeing her do that “heart pump” move last night was too bizarre to ignore.

I’m curious as to why they left off the Women’s Champion, though they may not even be building up for something until WrestleMania (No Way Out for the Smackdown girls?), which is 60+ days away, so I guess there’s no rush. Still, a small ambush on Beth and Rosa would have helped keep the interest in their fued alive. Eh, there’s always next week, I guess…

Melanie:
Last night’s show was almost like, “Meet some new faces…” Three of the four staples of Raw over the past couple of months were conspicuous by their absence, while three faces we haven’t seen in a while got a chance to shine. I’m all for that, but I don’t think it’s cool to drop the Women’s Champion from the show altogether. She could easily have been out doing commentary for the Beth-Candice match.

Anyway, kicking off the action was a mixed tag team match designed to prolong the feud between Punk and Regal, but we’re all more interested in seeing Mickie and Layla, I am anyway. Diva Dirt is very Layla-inclined, so I marked out a lot when I saw her all booted for this match. I gotta say, this was standard mixed tag fare and it wasn’t anything to write home about. I’m really hoping Layla gets a singles match one of these days, because she never seems to do much in these tag matches; hopefully this was the start of a mini-feud with Layla and Mickie in the coming weeks. Layla looked really aggressive and plays a great heel in the ring, but I would need to see her in a singles match to judge her wrestling. There wasn’t much technicality in it between these two, though that double clothesline was pretty good.

Later we saw Beth go one on one with Candice. Considering that most of their matches against each other so far have either been on pay per view or at the very least, a high profile part of Raw, this was almost a ‘throwaway’ on last night’s show. But then again, it seems as though Candice is but a jobber at this point. We all knew going into it, this would be a squash and that’s what it was.

I’ve never really enjoyed any of the Beth-Candice matches, the two seem so mismatched, it’s hard to take seriously. Some decent ring-work from Candice, I have to admit. She seemed more on her game than in the past but at this point, I don’t think there’s any salvaging her career; the crowd were absolutely dead for her and we got to see live in HD what a recent house show audience got to see: an out of shape, tubby Candice. Admitted, most women would still kill to have her body but as an athlete that’s not a good look for the Diva. And I don’t know why, but her attire seems to keep getting worse: bright red and yellow? The stars and the font on the ‘Defining Beauty’ look like they were created in Microsoft Word’s Word Art section.

I think it’s pretty telling of where Candice is at, when the crowd are absolutely dead for her. Not even a boo. Fans seem to be tired of her; Kelly, Mickie and more recently Melina seem to have the cheers locked down. I’ve always seen Candice as a one hit wonder/fluke. And what better way to add the exclamation point than have the newbie throw you out the ring.