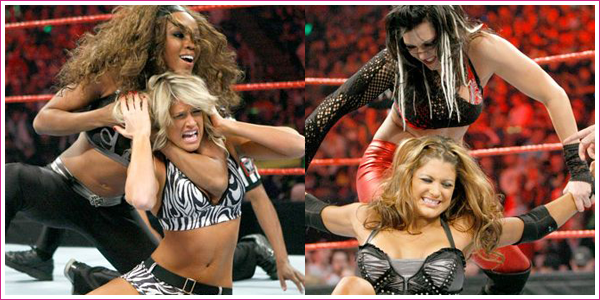 With two spots left in the semi-finals, the Raw Divas soldiered on with the Divas Championship tournament, competing in two matches. After last week’s two tournament openers (one on Raw, the other on Superstars), would the underwhelming feeling improve with this weeks bouts? Let’s see.. The first bout of the night featured Kelly Kelly and Alicia Fox battling to go on to the next round:

Kelly makes her entrance, dressed in Maria’s leftover fabric scraps and shoes that are definitely not meant for athletic competition. You’re just asking for a sprained ankle with those skater shoes, girl.. Alicia follows, and the match starts with a rough tie-up. Kelly backs Alicia into the ropes, and the referee gets between them (literally) to break it up. Alicia takes this pause in the match to blast Kelly with a forearm, kneeing her and tossing her into the corner. She smashes her face into the turnbuckle a few times before hitting a snapmare.

Alicia keeps her grasp on Kelly’s hair, latching her into a sleeper hold. She makes a grab for her nose, wrenching Kelly’s face and switching the hold to the mat, keeping her locked in. Alicia shows some great aggression with this, the hold punctuated by Kelly’s screams. Kelly might overdo the screaming most of the time, but it’s moments like these that they’re effective. Kelly fights to get free, and Alicia moves back onto her knees, not letting go. Kelly eventually gets to her feet, punching Alicia in the stomach and freeing herself from the hold.

Still, Alicia reclaims control, irish-whipping Kelly into the corner. Kelly stops herself with the top turnbuckle, attempting a hurricanrana on Alicia, but she catches Kelly’s legs and tosses her over the ropes onto the ring apron. Alicia goes for the attack, but Kelly lands a forearm, grabbing her and pulling her over the ropes. Alicia lands on the outside, and Kelly hits a crossbody from the ring apron, then quickly tossing Alicia back into the ring. Kelly goes on her textbook offense (press the up arrow and triangle on PS3 to trigger it), punctuated by a long, twirly hurricanrana. She attempts a frankensteiner, but Alicia stops her momentum, turning it into a sick powerbomb, folding up Kelly into a pin. She gets the 3-count and advances in the tournament! She will face Maryse next week in the semi-finals.

Needless to say, I was extremely surprised to see Alicia win. I was pretty confident in the fact that the WWE wanted to push Kelly as the top babyface, given the great crowd reactions she gets and the fact that they use her in their marketing more than any other Diva. That’s not to say that I’m not happy with Alicia winning–I was rooting for her, in fact. I’m glad that she won, and I feel that she’s much more deserving of the Divas Championship than Kelly. It’s a little strange to think that, given how much longer Kelly’s been in the WWE. Most are aware that the girls were hired at the same time, though, and Alicia just spent her time training in the developmental system while Kelly did stripteases on ECW.

The match, and the difference in skill it showed between Alicia and Kelly really demonstrates how much a little investment in the Divas can pay off. Instead of tossing them onto TV at the first chance, it’s much smarter to let them hone their craft out of the limelight. Alicia’s shining proof of that, and while she’s no where near her full potential yet, she has so much more ring presence and natural skill than Kelly. Kelly has certainly improved, but she seems stuck in the 5-move flashy move-set that benefits her rather bland babyface persona. If she could break out of that and develop some dimension (in both her character and ring work), she would be so much more interesting to watch and come across as a more serious wrestler. It probably doesn’t help that she’s wearing tiny outfits to wrestle in while wearing tennis shoes. It may not seem like much, but things like not wearing proper ring gear can send subconscious messages to viewers–her image, as it is now, makes her look like a girl who rarely wrestles, almost like someone they plucked out of the crowd. I might sound crazy, but a little thing like wearing boots really do make one look like a serious wrestler. Then again, she might not be going for that look. If so, she can continue being Professional Wrester Barbie and be on her merry way. I’m not looking to bash the girl–I just have trouble taking her seriously as a wrestler with her seemingly half-assed image.

As for the match itself, it felt (as is becoming the norm on Raw) like the match was on fast forward. The girls never got the chance to really develop a flow, and just flew from spot to spot. Alicia did great in dominating Kelly, showing some real tenacity in her sleeper hold, and Kelly did her usual moves as well as she has in every match in recent memory. I’d love to see Kelly grow out of the “clothesline, dropkick, hurricanrana” combo, but this match just didn’t have room to spare, so I don’t really blame her for using the same flurry of offense. It was just the typical “heel dominates, face fights back, heel pulls out the win” story–unimaginative, but entertaining for what it was. Kelly and Alicia seem to work well together, so it would be cool to see them feud sometime in the future. Alicia could really benefit from the insta-heat a heel tends to get for beating on Kelly. But that’s for another time, because Alicia a bigger things to worry about. Next week, as it is announced, she will face Gail Kim in the semi-finals.

The next (and last) first round match had Eve Torres taking on Katie Lea:

I find it kind of funny that the WWE punched a hole in their “Burchills get fired” storyline just because they needed a heel for Eve to face. Yeah, I’m sure Katie Lea is mourning her drop from ECW to Raw–what a step down! Personally, I’d feel shafted if I were Nikki Bella, but I suppose the WWE won’t risk exploding fans’ heads by pitting faces against each other–who would they cheer for??? Please, think of the children!

Anyways, Katie Lea surfaced on Raw to face Eve, and they are joined on commentary by Maryse. Of course the WWE had to find a way to put Maryse on television, but it just seems silly to have her do commentary when she’s on the same level playing field in the tournament as Gail and Alicia–or as the WWE would like us to think. I still believe that it’s painfully obvious that she will come out on top, and pulling stunts like putting her on commentary only serves to make it that much more obvious. Now, I know that she is set to face the winner of this match, but with this strategy, why didn’t Gail do commentary for the Alicia/Kelly match? Oh yeah, she was busy awkwardly talking to Carlito backstage. It just doesn’t make sense, storyline-wise, and just shows how the WWE will do whatever it takes, even exposing the outcome of the tournament, to get their hot commodity some screen time. I really will eat my hat if she doesn’t win the tournament.

But anywho, we need to focus on the match at hand. Katie Lea starts the match by taking down Eve and going for a quick, unsuccessful pin attempt. She pulls back Eve’s hands and drives her knee between her shoulder blades, wrenching her shoulders in the process. Meanwhile, Maryse is chatting on commentary, and it’s kind of fitting that she’s completely disregarding the match, talking about herself all the while. It certainly fits her character, but it’s insulting to Eve and Katie Lea to put her above the match we’re supposed to be watching. Again, it just demonstrates the “leg up” Maryse has on her competition, and how obvious it is that the tournament’s only serving to elevate Maryse. I’m almost expecting to see Maryse with the Divas Championship on her shoulder, surveying a #1 contendership match instead of a tournament match in which she has no advantage over the others. Listening to Maryse contradict herself (saying that Eve and Katie Lea are great competitors, then two seconds later complaining about being bored of the match) isn’t entertaining to me. It’s like they took her character and stretched it too thin–there’s not enough material to even fill up a 2 minute match, and it speaks volumes about her character.

In the ring (yes, there’s still a match going on!) Eve powers out of the hold, flipping forward and kicking Katie Lea in the face. Eve delivers some offense and goes for a cross-body, but Katie catches her, spinning her into a vicious-looking back breaker. She goes for the pin, but only gets a 2-count. Eve heads to the corner to regroup and Katie goes after her, but gets a kick to the gut for her troubles. She swings at Eve, but her clothesline is ducked, and Eve hits one of her own, going for the pin (on a clothesline??). She gets a 2-count.

Eve hits some dropkicks and goes for her front flip splash, but Katie brings her knees up, blocking it. She goes for a pin and gets 2, complaining to the referee. Eve takes advantage of this distraction, rolling her up into the pin, getting the 3-count.

This match, like the last, was ridiculously short, and featured impressive work by the heel. Katie Lea did great with the little she was given to do, and Eve made a more exciting “rallying babyface” than Kelly, though the roll-up ending totally took what little wind the match had in its sails. I’d love to see these girls have a match that’s longer than a few minutes and really see what they’re able to pull off together–it seems like an interesting dynamic to play off of.

I have to say that, while it was nice to see two Divas matches in one night, it felt like they took one of reasonable length and split it in two–both in content and length–in order to fit both matches into the show. In this match (as well as with Alicia/Kelly), the WWE just didn’t give them time to develop a compelling match. It’s like walking in on a movie halfway through; if you don’t see any of the characters’ development, you’re not going to give a shit about how it ends.

That’s exactly what happened in both of these matches, and while I’m happy with their outcomes (because, let’s face it, Katie Lea never stood a chance of advancing), it just sucks to see so little effort being put into this tournament. These four fractured, minuscule matches have brought very little excitement and in no way felt as if they’re building to something big. I hope the WWE decides to actually invest something into the remaining matches, because if not, they might as well have handed the Divas Championship to Maryse that very moment Melina tore her ACL–there will have been nothing achieved through this besides the elevation of Maryse, so why waste the time?