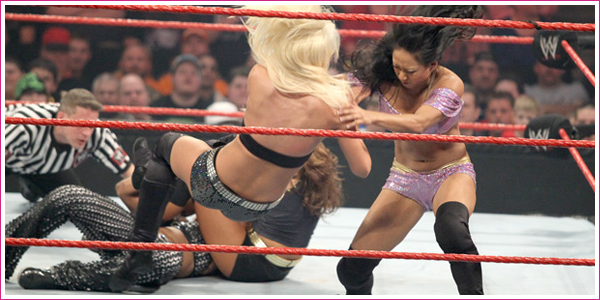 With last week featuring two Divas Championship Tournament matches, one would think that the WWE were going full-speed ahead with the tourny. However, this week brought a halt to it, so to speak, because the WWE felt fit to press pause on the tournament in order to feature a tag team match with the remaining four Divas. Gail Kim and Eve Torres took on Maryse and Alicia Fox in something that shouldn’t really make sense in the context of the tournament. Watch and draw your own conclusions about whether or not it was unnecessary:

Gail and Maryse start out the match, with Gail immediately outsmarting Maryse and rolling her up into a pin. Maryse kicks out at 2 and is whipped into the corner, receiving Gail’s shoulder attack. Gail slips out of the ring and climbs the turnbuckle, hitting a sit-down dropkick and going for another pin, still getting 2. Maryse reverses an irish-whip, sending Gail into the ropes. When she gets close enough, Alicia grabs her by the hair, and Gail takes a wild swing at her, which she ducks. Maryse lands a well-placed boot that sends Gail flying out of the ring. Alicia attacks her on the outside, slamming her head against the floor before tossing her back into the ring.

Maryse brings Gail to her feet, hitting her with a forearm before planting her with a backbreaker. She goes for the pin and gets a 2-count. Maryse grabs a handful of Gail’s hair and brings her to the corner, tagging in Alicia. Maryse hits a snapmare on Gail and she and Alicia lift her up from either side, slamming her down onto her back. Gail gets to her feet and battles back at Alicia until she’s taken out with another backbreaker (it looked like she did 75% of the work too, flipping into it like she did). Alicia goes for the pin, and Gail kicks out at 2.

While Gail gathers herself Alicia preps for her scissors kick. However, Gail moves at the last moment and likely gives Alicia a mean charley horse. Gail moves to a corner into which Alicia charges, but she moves and lets her get a face full of turnbuckle. Gail springs to her own corner and tags in Eve. Eve goes on a blast of offense, whipping Alicia into a corner and charging, but getting a boot to the face. Alicia comes running out of the corner but Eve halts her with an armdrag. She hits a dropkick (which we can only assume Alicia was selling out of habit rather than impact) and another (this one making contact). She clotheslines Alicia and hits her somersault splash and goes for the pin. The referee double-checks Alicia’s shoulders (kudos, ref!), so Alicia only stays down for a 1-count.

Alicia gains control and whips Eve into the corner, but gets an elbow to the face. Eve climbs the turnbuckle and latches Alicia into an arm bar, flipping forward and landing on the mat, switching into a full arm bar. Maryse tries to come to Alicia’s aid but Gail takes her out, and Alicia soon submits. Eve and Gail celebrate their victory as Maryse tosses up her hands to show her aloofness while Alicia uses hers to support her sore shoulder.

I was pretty confused when this match came about, mostly because I was expecting a tournament semi-final match. A tag team match is fine and dandy, but it makes little sense in the course of the tournament. These women are supposed to be enemies–after all, Gail might face Eve in the finals, or Maryse might face Alicia in the finals. We know that that’s not likely to happen, but they’ve got to keep that option open, and teaming these girls up together just makes you forget that they’re supposed to be against one another. Sure, Eve and Gail can be buddy-buddy–they’re good girls, after all–but having Alicia and Maryse coexist? I don’t know.. I know this match was likely just to delay the tournament another week and make a Royal Rumble match more likely (with two semi-final matches next week), but they could have used the four girls in a more creative way that didn’t make the tournament seem like friendly competiton rather than a fierce battle for a vacated championship.

The match itself was decent, with Gail doing most of the work with Maryse. I know that that’s become Maryse’s staple–take the punishment, hit a move or two then get out of the ring–but it’s just tiring to never see Maryse really wrestle. All it does is make it look like Maryse can’t string two moves together, and I’m sure that’s not the message they want to send. Alicia and Eve worked well together, I think, aside from the botched dropkick, but I’m sure that one more will be the talk of the town for a while anyways. Eve’s cool submission looks like it could develop into a fantastic move, given that they don’t overdo it and have her bust it out every match. A cool move like that should only be busted out on special occasions in order to preserve its “wow” factor. I can only hope that Eve’s got more tricks up her sleeve so her move-set can keep from getting as predictable as some other Divas’.

It was cool to see a Divas match end on submission–it’s been a while since we’ve seen that. Hell, I’m just glad it didn’t end on a roll-up. I still can’t keep from wishing that the WWE went another route with this tournament off-week, doing something that could keep these girls in separate corners and maintain the isolating illusion that tournaments can bring. It’s supposed to be every girl for herself, isn’t it?