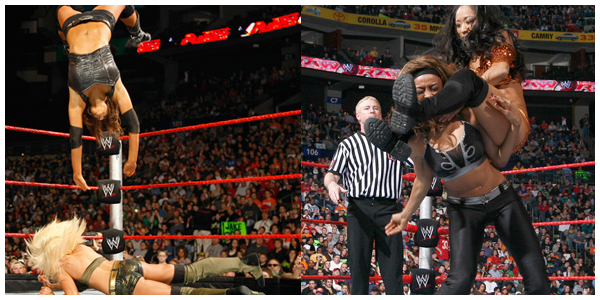 Last week we were caught a bit off guard when the WWE decided to hold a tag team match instead of the semi-finals of the Divas Championship Tournament. It seemed to me back then that it would suck out what little momentum the tournament already had, but did it? Let’s take a look at this week’s action–two semi-finals matches–and see if the tournament has any momentum left going into the finals.

First up we have Maryse and Eve Torres in their semi-final match. Maryse gets on the microphone, telling the other Divas in the tournament that they are “just wasting their time”, and that she is most certainly going to win the Divas Championship. The Divas could have known this weeks ago if they only read Diva Dirt, but I suppose the point is made clearer when spoken in French. She is interrupted by guest GM Dulé Hill (of “Psyche” fame) messing with the pyrotechnics. He blasts the entrance ramp with pyro, and Maryse has a few choice words for him. It’s funny, and Hill provides a good foil for Maryse’s bitchy anger (he was also a good foil for another Diva’s wrath, but we’ll get to that later). Finally, Eve makes her entrance and the match starts:

They start with a tie-up, Eve delivering a few blows to Maryse and backing her into the corner. She continues with this dominance until the ref separates them. Maryse then slaps her across the face and goes for another, but Eve ducks and hits a dropkick, going for the pin. Maryse kicks out, and Michael Cole remarks how Eve winning would be a “mild upset”. Try total upset, Cole, you and me both know there ain’t no way Maryse is losing.

Maryse whips Eve into the ropes, but Eve stops her own momentum and delivers a kick to the face. She bounces off the ropes once more and slams Maryse to the mat hair first (maybe head first, but Maryse’s weave is looking mighty long these days..). Eve hits her somersault splash and attempts a pin, Maryse kicking out at 2. Maryse seeks refuge in the corner, but Eve sandwiches her with a flying clothesline, planting her to the mat with a scoop slam. She climbs to the top rope (Maryse casually~ getting into position), going for a moonsault that doesn’t connect. Maryse rolls out of the way just in time, and Eve eats mat.

Maryse looks to take advantage of this by hitting the French Kiss right then and there, but Eve reverses it into a Northern Lights Suplex. It wasn’t Molly Holly-esque by any means (she couldn’t hold the bridge, for one), but she goes for the pin nonetheless, and Maryse kicks out.

Maryse holds onto the ropes as Eve tries to drag her away, and Maryse kicks her in the stomach, pulling her to the center of the ring and planting her with the French Kiss. One provocative~ pin later, and Maryse advances to the finals.

Another Raw, another rushed Divas match. Another Raw, another match where Eve focused on the flash instead of hte substance. Another Raw, another match where Maryse barely wrestles but squeaks out the win. See a pattern here? You know, besides my repetitive sentence structure. If you listened to the D3 earlier today you would know that Melanie and I didn’t have the higest expectations going into this match, but it failed to even meet them, as low as they were. Maybe if both Divas got out of their respective comfort zones, we might have seen something new or interesting. As it is, it was a lackluster match and one not worthy of a semi-finals match in what is supposed to be a high-stakes tournament.

Sandwiched between our two semi-finals matches was a cameo by Kelly Kelly, who was brought up on the “random match generator” to face Carlito. It was nothing special, most likely just an excuse to give her face time. The segment expanded into something involving Santino and Jack Swagger, but don’t ask me what happened. All I know is that Kelly didn’t step foot into the ring, so I won’t bother posting video of it. Just imagine her standing around looking confused, and you’re up to speed. But on to more entertaining things:

Later in the night, guest GM Dulé Hill (of “interrupting Maryse’s promo with pyro” fame) is approached by Alicia Fox, who asks him if he really is a psychic, like the one his partner portrays on TV. Maybe that question would’ve been better delivered by Maria circa her “ditzy” phase, but it set up a pretty entertaining exchange. Hill tells Alicia that he envisions her winning her semi-final match with Gail Kim tonight, and that he will be at ringside to be her “good luck charm”. She insinuates that bad things will happen if he’s wrong, and blows him off when he tries to be cutesy with her. Cena summarizes what will happen to him if Alicia loses, and needless to say he’s going to be pulling for her all the way. Overall it was a funny little segment, and showcased some of that charisma that Alicia’s been hiding as of late. If only they could find a permanent foil for her foul attitude–is there any wrestler, male or female, with Hill’s comedic talents? Probably not, because then they’d be acting instead of wrestling. Sigh..

Cut to the match, and Hill is on commentary, mentally summoning the gods to deliver Alicia a victory. Meanwhile, Gail is already in the ring, and Alicia makes a super fast entrance (short on time, are we WWE? maybe that DX promo could have stood to have a few minutes shaved off of it). The match is on:

They get things going quick with a tie-up, Alicia taking control and getting Gail in a side headlock, whipping her to the mat. She keeps the headlock latched on, transitioning from the mat to her feet quickly. Gail shoves Alicia off of her and into the ropes, only to get a shoulder blast from Alicia, sending her to the mat. Alicia runs the ropes, leaping over Gail once and then getting catapulted by Gail’s legs and sent flying across the ring.

Gail attempts what I can only assume was a frankensteiner, but she finds herself perched precariously on Alicia’s shoulders, unable to do anything but flip her backwards into an awkward half hurricanrana. They tried to salvage it admirably, but it just didn’t look good at all. I think Alicia’s tallness factored into it–she just couldn’t fold herself enough to sell what was left of the botched move. Hopefully she can learn to manage her height a bit better in the ring (as I’ve noticed that she’s struggled with that a bit in the past), especially with the babyfaces on Raw being so hurricanrana-happy.

Alicia slips through to the apron despite Gail trying to keep her in, so Gail tosses her back in over the top rope. Gail batters Alicia into the corner, but Alicia turns the tables, grabbing Gail and slamming her into the corner instead. She slams Gail into the corner once more before hitting a tilt-a-whirl backbreaker and going for the pin. Gail kicks out at 2.

Alicia whips Gail into the corner and goes for a kick, but misses her mark. She turns around into a scoop slam by Gail. She attempts a pin, but only gets a 2-count. Gail picks her up, but is hooked into a small package. Gail manages to kick out at 2. Gail kicks Alicia in the back of the leg, hitting her with a forearm. Alicia shoves her off before she can hit her again. Off the ropes, Gail is picked up by Alicia, but she squirms free of the hold, switching it into the Eat Defeat. She pins Alicia and advances to the finals. Gail is thrilled, Alicia is pissed, and Hill is terrified.

Alicia recovers rather quickly (you need to sell it the move, girl!) and approaches Dulé outside the ring, yelling, “What happened to my victory?!”. He tries to explain that he didn’t mean to promise her that she would win, but she doesn’t want to hear any of it. He tells her he likes her shoes. She slaps him in the face and departs.

I haven’t been too keen on this guest GM thing, but I have to say that Dulé Hill was probably the most entertaining GM I’ve seen so far. For once, a GM added to the Divas’ product rather than detracted from it (hello, stupid GM-themed gimmick matches!). He was hilarious and a perfect partner for Alicia in their segments. Even with her loss, it felt like Alicia was given the rub, her character on full display. I wish they would delve into the more, possibly giving her a partner to play off of. For now I’m just content that they gave a Diva something to do with a GM that didn’t involve linking arms with them and making awkward sexual advances.

The match, like the Maryse/Eve match, definitely suffered from its short time frame. It felt like Gail and Alicia were rushing to finish in time, and the botch early on (which I attribute to both Divas and crappy timing) totally took the wind out of their sails. From then on, their chemistry was out of whack and there was miscommunication all over the place. It certainly wasn’t a match befitting the tournament, but come on, have any of the matches been thus far? It, in its lackluster-ness, was just par for the course.

Both matches tonight failed to excite–from Maryse and Eve’s predictable match to Gail and Alicia’s messy one–it was just a night of mediocre (or less) matches. I hesitate to put most of the blame on the Divas, as it’s pitiful how little time the WWE is giving them for matches that are supposed to hold some importance. It feels as though the clock is ticking in their heads, and it’s psyching them out, causing them to not wrestle fluidly and even botch. Booking can make or break a tournament, and it’s been proven time and time again in this tournament that the WWE doesn’t really give two shits about it. From the blink-and-you-missed-it matches to the inconsistent placement of those matches, it seems like these shows are just placeholders until Maryse can finally hold that butterfly belt. But when we finally get there, is it really going to be any better?