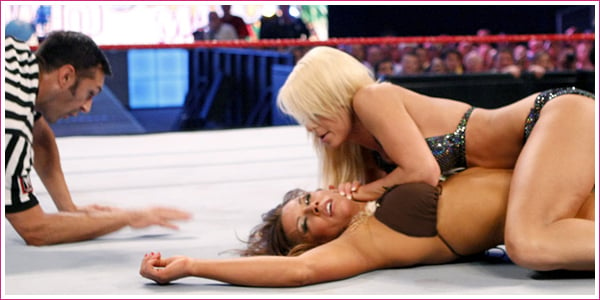 Last night’s Raw was a scary one, as WWE seemingly found a balance between the throwback T&A and actual wrestling. However, the two don’t quite go together and as the title of this post would suggest, I liken it to ‘running with scissors’. It wasn’t a bikini contest nor was it a respectable wrestling match, it just didn’t work. I fear WWE will use this new found balance on future shows, in fact, I wouldn’t be surprised if SmackDown got it’s ‘turn’ this Friday.

I can honestly tell you that on first watch, I had no idea what was going on in the ring, all I could remember was the end of the match. The rest is a blur since I, and probably many of you, couldn’t get past the ‘wrestling in bikinis’ crap. So rewatching the match for this Redux is the only way I can actually talk about the wrestling in the match — but then again, I don’t necessarily want to. It just seems pointless to call the wrestling [as Michael Cole did last night] in such a match. However for the sake of this column, I will attempt to talk about the match…

First of all, I have no problem with the occasional swimsuit type stuff… just keep it out of the ring. I think all the girls [except Kelly Kelly] looked gorgeous in their swimsuits, but I would prefer to see that in a Summer Skin photoshoot or a Divas magazine. They looked great, but stuff like that should be reserved for a beach themed photoshoot or something — I don’t want to see it on Raw. Rosa’s one piece was probably my favourite, she looked hot. The only Diva that didn’t look great was Kelly, in her cliched tacky hot pink bikini.

So looking at this match, it’s funny how they had Kelly as the centerpiece of this match; it goes to show just what they think of her, having her be the ‘eye candy’ to sell the match rather than trying to establish her as an actual wrestler, which she has the chops to become. Instead of coming out to the top babyface’s music like they usually do [which is Mickie James], this week we have the girls coming out to Kelly’s music and her taking the center spot which is usually Mickie’s. Any other week it’d raise eyebrows, but it seemed very clear that they did it on purpose to sell Kelly as the ‘eye candy’, which is funny because Mickie looked 10x hotter in her bikini than Kelly did. And this should put to rest those horrible rumours about Mickie’s weight, because she looked banging! I guess blondes are hotter in the WWE Universe *eyeroll*

Meanwhile, leading the heels was Maryse flanked by Rosa Mendes and Alicia Fox. I pretty much guessed that would be the team beforehand. No Beth Phoenix, go figure… I don’t know if she should feel offended WWE didn’t want to put her in a bikini or if she should feel honoured. Perhaps a bit of both?

My two favourite new Raw Divas, Alicia Fox and Gail Kim kick things off and Alicia from the outset looks aggressive, getting in Gail’s face. Good look for A-Fox, it shows that she’s not afraid to mix it up with the veterans, as we’ve already seen in the past. The more experienced Gail however uses her quick wit to roll up Gail, but Alicia kicks out and goes for a cover of her own. Gail hits a nice hurricanrana but Alicia manages to get the upperhand and tags out to Rosa Mendes. Oh lord, let us pray…

Thankfully, Rosa isn’t going for anything technical and soon G-Kim takes the lead with a nice clothesline on Rosa followed by a tag to Kelly, who hits an impressive handspring elbow. Kelly goes for a monkey flip, but Rosa pushes her onto the mat. Rosa goes for a cover and then lays in some kicks. That’s it Rosa, just keep to the stomping, it’s best you don’t try any actual moves. Alicia Fierce [Sasha Fierce, get it?] is back with a headlock for a little while before Kelly counters. Kelly and Alicia tag out at the same time to Maryse and Mickie and things pick up!

Mickie hits some jumping clotheslines on Maryse and knocks her partners off the apron. She then hits Maryse with a nice hurricanrana from the corner before going up top, hitting an awkward Thesz press. Mickie goes for the cover but in come A-Fox and Rosa and we all know what this means… six Diva brawl!

In all the excitement, ‘Maurice’ catches Mickie off guard throwing her into the ringpost and hitting her French Kiss DDT, which didn’t look as good as it usually does, for the win. Interesting ending and it almost salvaged what I would call a throwaway match. They seemingly tacked on a little storyline to the end which is good. Usually the babyfaces get the win for the fan reaction, but it’s nice to see that they actually developed the storyline after what was essentially a pointless match by having Maryse pin her opponent.