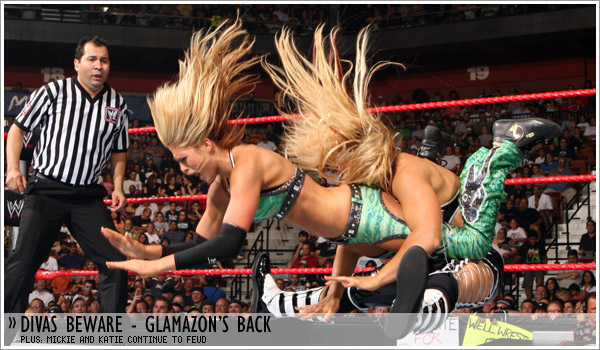 Thoughts & Reactions
It is with great pain that I write this week’s Raw Redux, because for the first time ever – I feel as though I don’t have much to write. Last night’s Raw wasn’t neither bad nor good, it was just average. There was a sufficient use of the Divas, which I applaud – they kept that going from last week’s all time high of Diva usage; but I felt this week’s show wasn’t much to write home about and that’s not to say it was at all bad.

The mixed tag team match, I saw coming a mile off and it was just fine. To tell you the truth, the Mickie-Katie feud has waned in recent weeks and I’m just not that excited to see another match between these two unless Katie pulls off the big one and becomes the Women’s Champion. I don’t really see this rematch as SummerSlam worthy unless the title were to change hands. The mixed tag was on par with the mixed tag team match we saw a month or so back with Mr Kennedy in Kofi Kingston’s place, both of these matches were good. But it did leave me wondering “What will they do next?” Because like I say, I feel this feud has lost it’s steam. And I hate to say that because I have been championing this feud and hoping it would really take off, but as of yet we’ve not seen anything too exciting happen between Katie and Mickie. Katie is a very capable wrestler, but as the weeks pass I’m beginning to wonder what flare she has in the ring – because so far, she has been pretty average. I would love to see Katie more confident in the ring and really show us a move set that sets her apart from the other Divas, Beth Phoenix and Mickie James have their unique signature moves that they can turn to in every match but Katie so far, has only displayed the basic moves. Katie, I dare you to excite me in the ring! Come on, I know you have it in you…

The second (well actually it aired earlier) match on Raw was Beth Phoenix taking on Kelly Kelly, I was left a little disappointed because I had hoped Santino would come down to the ring but as the night progressed, we did get to see that storyline be addressed. This match was again, just fine… actually, it was a little more than just fine. Kelly and Beth shared some chemistry in the ring and that’s something I wasn’t expecting, Kelly worked well with Beth – again, something I wasn’t expecting. If anything can be said for this match, it’s that it was very vocal. I almost felt embarassed watching because it really did sound like a barrage of orgasms from Kelly more so than Beth. Fun match, I loved the high impact face plant that Beth used to finish Kelly off (hence why I used it in the image above), hopefully she’ll retire the boring suplex thing and use this more often.

Continuing on the Beth front, she turned up later for Santino’s match and a part of me figured out where this was going but that was surpressed by the thoughts of, “WWE wouldn’t actually do this, would they?” Lo and behold, they did! I have to say, Beth and Santino straddling each other with Beth screaming “Get off me!” just seemed awkward, I guess that was the desired effect but it felt awkward as in the acting was bad. I wonder where they’ll go with this? It seems the sour Glamazon is sweetening up a little, and I don’t like it! I would have prefered to have seen Santino challenge Beth to a rematch and see these two feud rather than go for a love story. This seemed a little like Stockholm Syndrome, I wonder if that’s how they’ll play it out? I can totally see the Glamazon being the bunny boiler girlfriend, that could be fun to watch!

Katie Lea: Again, I dare you to excite me, Katie!

Layla: When I started my campaign to move Layla to Raw, having her in backstage skits with Jamie Noble was not what I had in mind.

The In-Between: Everyone dressed as youâ€™d expect this week (again), no point writing!

Photos
Below, are digitals of the Divas from RAW. Copyright to World Wrestling Entertainment, Inc.