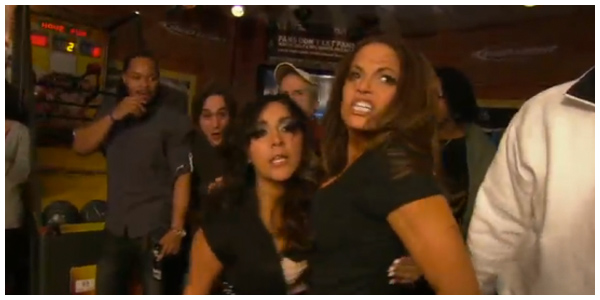 Holy F-bomb, Batman! Last night’s Raw needed a lot of censoring when it came to the Divas in a last effort to attract interest before Sunday’s WrestleMania pay per view.

In a taped segment, Trish Stratus and Snooki were spotted at a bar in New Jersey with the latter looking in no fit state for live TV. (Glug, glug, glug!) Lay-Cool didn’t know what was about to hit ’em…

Trish and Snooki are drinkin’ it up (well, one more than the other) at Miami Mike’s when some dude comes up to them and pesters our pint-sized (pint… *cough*) MTV star. Snooki tells Josh Mathews that she’s ready for ‘Mania (“Bring it on, bitches!”). The interview is interrupted by the lurker — who, by the way, is named Danny E (vital information right there) — and he ends up getting a smack from Snooki for his efforts. A change from being on the receiving end, eh?

The interview comes to a close but wait! The cameras go back to the bar where Lay-Cool have appeared. Snooki throws a drink all over poor Layla and things disseminate. Before you know it, Trish and Michelle are mounted on a pool table exchanging blows. But the real victim is Layla as she has to deal with slizzard Snooki. What a brave woman. *Tips hat*

So does this do the trick in getting one excited for ‘Mania on Sunday? Kind of. It wasn’t quite what I was hoping it would be. On paper it sounded epic, but in execution — as with most things Diva — it felt far too short & you couldn’t really catch all of the action. It was definitely cool to see the Divas acting rough and tumble for a change, but it certainly contradicts the image that WWE usually likes to portray for its women.

Still, it was a decent effort in inciting some heat going into ‘Mania and something different, though it didn’t totally work for me.